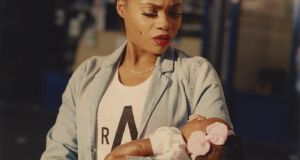 This year’s Zurich Portrait Prize has been awarded to Enda Bowe, one of 27 shortlisted artists, at the National Gallery of Ireland. He won the prize for his photograph of a young mother with her baby, Cybil McCaddy with Daughter Lulu.

Joe Dunne and Salvatore of Lucan, whose works were highly commended by the judges, each receive €1,500.

Bowe, whose photograph is part of an ongoing project titled Clapton Blossoms, said he wanted to give a contemporary update to the classical theme of mother and child. Cybil is a woman living in a housing estate in East London, and in this and his photographs of other individuals living there, Bowe explained, he was keen to celebrate humanity and social diversity at a time when barriers and enmities were growing.

His previous projects include portraits of young people in Carlow, published as At Mirrored River, and a study of young people on both sides of the sectarian divide in Northern Ireland.

Dunne’s large family and self-portrait is partly a contemporary reworking of Velázquez’s celebrated painting Las Meninas. Salvatore of Lucan’s work, a dramatic study of he and his girlfriend Lucy, explores the complexity and “hard work” of personal relationships.

This year sees the launch of the Zurich Young Portrait Prize, open to entrants up to the age of 18. An exhibition in the Millennium Wing studio features the work of 20 artists shortlisted in four age categories (six years and under, seven-11, 12-15 and 16-18).

The overall winner, also a photograph, is a joint effort by Mabel Forsyth and Mary O’Carroll, both aged 12. They share €500, plus a box of high quality art materials. Callie Le Page, Jiaming Zheng, Erin Welch and Cara Pilbeam won in each of the four age categories.

Zurich took on sponsorship of the prize last year. Previously it had been sponsored by Hennessy for four years. 2018 was notable in that the prize went to a photographer, Mandy O’Neill, for the first time. O’Neill’s subject was a young woman, Diane, then a pupil at Larkin Community College.

O’Neill’s win seems to have encouraged photographers, as lens-based images lag only just behind paintings this year. And of course a photographer again claimed the top slot, edging out two painters.

The substantial shortlist exhibition, which features a diverse and impressive range of work, shows how difficult their task must have been. Two subjects of note are Mary Robinson (photographed by Johnny Savage) and Joe Duffy (painted by Brian McCarthy). Dragana Jurišic shows a dynamic photographic portrait of poet Paula Meehan, and Fionn McCann has a striking photograph of the imposing art world figure Tony Strickland.

Amy Walsh’s Mná na hÉireann is an ingenious conceptual project, a series of eight photographs, each symbolizing an individual at the centre of “Alphabet Cases” challenging the ban on abortion under the Eighth Amendment. Alphabet because each person was referred to as a letter, as in The Attorney General v X in 1992. Both shortlist exhibitions are on view until January 12th next.