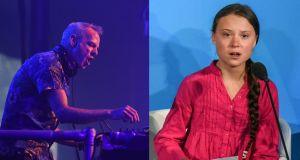 Fatboy Slim brought the message of climate activist Greta Thunberg to a new audience on Friday night, when he played a remix of her United Nations speech during a live show.

“People are dying. Entire ecosystems are collapsing. We are in the beginning of a mass extinction. And all you can talk about is money,” the 16-year-old is heard saying.

“Right here, right now is where we draw the line. The world is waking up. And change is coming, whether you like it or not.”
My full speech in United Nations General Assembly. #howdareyou https://t.co/eKZXDqTAcP

“We will not let you get away with this. Right here, right now is where we draw the line. The world is waking up. And change is coming, whether you like it or not.”

The mash-up first appeared online in September, after musician David Scott made and shared it to images of icebergs melting.

ABBA musician Bjorn Ulvaeus came out in support of the teenager in a video message last week. The Swedish pop singer said “the patriarchy is pissing in their pants in fear” of Thunberg, noting that she “drives some people, mostly men, crazy”.