A Bump Along the Way: Vibrant Bronagh Gallagher shines in charming Irish crowd-pleaser

Review: Tess McGowan wrote the film while pregnant, and it throbs with authenticity 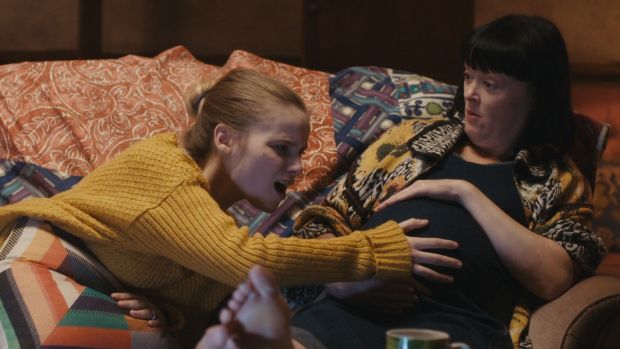 Lola Petticrew and Bronagh Gallagher in A Bump Along the Way

Film Title: A Bump Along the Way

Every now and then a small Irish film creeps up from nowhere and grabs a bit of unexpected, but deserved, attention. Beneficiary of a Northern Ireland Screen scheme promoting first-time talent, Shelly Love’s A Bump Along the Way has already managed that at the Galway Film Fleadh and the Toronto International Film Festival. Sometimes charm wins out.

The premise is so deliciously neat it seems amazing that no filmmaker has previously happened upon it. The reliably vibrant Bronagh Gallagher plays Pamela, middle-aged mother to an awkward, judgmental daughter named Allegra (Lola Pettigrew). In one of many spicy exchanges, the older woman notes that, when she gave Allegra a name that means “joy,” she didn’t “know [she] was being sarcastic.”

Pamela believes she is unable to have more children until, after a boozy encounter with a younger man, her body informs her otherwise. Allegra is embarrassed. The baby’s father is useless. Pamela, who works in a zesty contemporary bakery, settles in for a traumatic nine months.

Set in Derry, the picture is bound to draw comparison with a certain sitcom, but, though surging with the same Foyle wit, it marks out calmer territory for itself

There’s a lovely inversion here. Rather than a stern mom coping badly with her daughter’s unexpected pregnancy, we have an unforgiving teen rolling eyes at her parent’s apparent irresponsibility. Tess McGowan wrote the screenplay while pregnant, and the dialogue throbs with an authenticity that never gets in the way of the light comedy.

The film is equally wise about the pressures on the contemporary teenager: trying to keep head above water in an environment where any slight embarrassment feels like a life-changing disaster. Pettigrew reveals just enough affection beneath the barbs to reassure us that all chasms can be bridged. Gallagher, it hardly needs to be said, cackles her way through the wilder moments and finds layered sadness in the quieter exchanges. They’re a perfect pair.

Set in (ahem) Derry among (ahem) girls of secondary-school age, the picture is bound to draw comparison with a certain sitcom, but, though surging with the same Foyle wit, it marks out calmer territory for itself. The real city is there in the background.

Things do perhaps come together a little too neatly at the close. One or two lose ends might have been nice. But this is a charming film that will please crowds wherever it plays.

Reopening Highlanes Gallery: ‘The way we see crowds has changed’