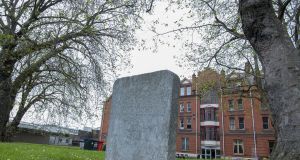 Quaker graves in the grounds of a HSE building on Cork Street in Dublin. Weir House, a nurses’ home, was built in 1903 to accommodate nurses working at Cork Street Fever Hospital. Photograph: Dave Meehan

A HSE-owned Edwardian institutional building, located in the grounds of Ireland’s oldest remaining Quaker cemetery, on Cork Street in Dublin, is to be redeveloped for housing by the Peter McVerry Trust.

Weir Home, named after Scottish philanthropist James Weir who funded its construction, was built in 1903 to accommodate nurses working at Cork Street Fever Hospital. It remained a nurses’ home until the late 1970s.

Since the early 1980s it has been used as a mental health facility, but due to its age and condition, the HSE has decided it is no longer suitable and plans to relocate its residents to a facility at Stanhope Street in Grangegorman, on the north side of the city.

The large red-brick institution shares its grounds with the Cork Street Quaker cemetery which was in use from the 1690s until the late 1860s. Concerns have been growing in recent months over the condition of the cemetery, particularly its old boundary walls and railings, amid divisions between the HSE and Dublin City Council over its future ownership.

The HSE said it had “committed” to transferring the building and cemetery to the council when the Stanhope Street facility was ready later this year. However, the council said it does not plan to take the building. It had previously considered developing the building for emergency accommodation but that plan “has not progressed”, it said.

It now emerges the McVerry Trust has agreed to take on the building. A spokesman for the charity said it intended, subject to planning permission, to convert the old building into approximately 20 social housing apartments for people leaving homelessness.

Separately the HSE has commissioned a conservation report on the historic cemetery. The report, completed by historic building consultant Rob Goodbody, identified 19 remaining “grave markers”, but said records suggested that “some 2,800 people were buried in Cork Street”.

The grave markers were “mostly in good condition, with cracking noted in two examples”, the report said, but the original walls had sustained damage over the years with some partial collapses and repairs using “wholly inappropriate” materials such as cement and concrete. Some structural problems were also caused by “invasive plants” growing on the walls “with their roots penetrating into the mortar, resulting in failure of the mortar or cracking of the masonry”.

The report recommends that ivy be “killed off, though its removal once dead is not necessary except for aesthetic reasons... It is essential that ivy is not pulled off the wall, even when dead, as this is likely to damage the masonry,” it said.

“In the medium term a programme of works must be devised to remove badly executed works that are damaging the masonry and to reconstruct the areas of the northern wall that have collapsed or are in very bad condition.” These works must be carried out in accordance with consents from the National Monuments Service. Long-term, the walls will need to be repointed to ensure their long-term survival, the report said.

The HSE said the report’s recommendations would be considered “in the context of healthcare service priorities and resource availability”.

The Peter McVerry Trust said it would be happy to accommodate any work to the cemetery which the HSE intended to carry out.