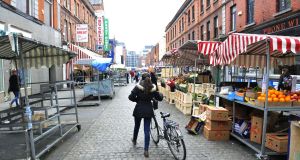 The Moore Street Advisory Group’s report warns that the 200-year-old market is facing ‘an existential crisis’ and is at imminent risk of closure unless a regeneration scheme is put in place. File photograph: Aidan Crawley

Minister for Culture and Heritage Josepha Madigan has asked Dublin City Council to take action on calls for the urgent regeneration of the Moore Street market amid concerns the area is in a “vicious circle of decline”.

Ms Madigan has written to council chief executive Owen Keegan on foot of the recommendations from a Government-appointed advisory group that relate to the council’s stewardship of the historic street market. She asked that Mr Keegan consider “at the earliest opportunity” the appointment of an expert group to advise on the area’s redevelopment.

The report of the Moore Street Advisory Group, submitted to Ms Madigan in recent weeks, warns that the 200-year-old market is facing “an existential crisis” and is at imminent risk of closure unless a regeneration programme is put in place.

The advisory group, which includes TDs, councillors, Moore Street traders and representatives of 1916 rising relatives, was set up by the Government in 2017 to achieve consensus between stakeholders, including the new owners of the site, Hammerson, on the future of the area.

Its report broadly welcomed Hammerson’s new plans for a retail, office, hotel and residential development on a site which stretches from O’Connell to Moore Street. However it was scathing of the neglect of the street market, which it says was in a “vicious circle of decline” with a lack of basic facilities such as toilets and inadequate power, water, lighting and cleaning.

“Against such a stark background of urban decay and neglect, the fact that new trader licences have not been issued in recent years by Dublin City Council underpins an unsatisfactory relationship between the traders and the council where the council’s long-term intentions towards the market are not clear,” it said.

“The Moore Street market is facing an existential crisis. If it is not fundamentally re-imagined and regenerated around a compelling future vision it will almost certainly go under.”

The letter points out that two of the report’s recommendations “expressly relate to Dublin City Council’s stewardship of the market”. The first is a recommendation which “notes with approval the intention of the Hammerson plan to support the retention and development of the market and considers that a similar commitment from the licensing authority, DCC, is now required.”

The second recommendation relates to the appointment of an expert group to “lead the urgent regeneration” of the market. “This group should consist of Moore Street traders and people in Ireland and elsewhere who have been at the heart of the emergence of country markets” and who have “an in-depth understanding of the quality, product range and experience which street market customers now seek”.

The letter will be issued to city councillors on Monday.

The council is separately planning to redevelop the nearby Victorian fruit and vegetable wholesale market on Mary’s Lane, which closed last week after 127 years. The new market is expected to be similar to continental style food markets with a range of producers including butchers, bakers, cheesemongers, fishmongers and greengrocers. Concerns have been raised that the Mary’s Lane offering could affect the viability of Moore Street trade if the street market is not also redeveloped.

Lifting the lid on paid-for politics
3

Battle of Cable Street: when the Irish helped beat back the fascists
4

In a week of tributes to John Hume, a 12-year-old has the biggest impact
9