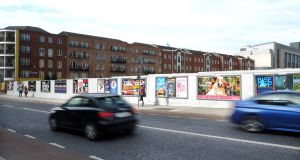 The vacant site at Church Street-Hammond Lane in Dublin. Over 10 years ago it was designated for a new family law and children’s court. Photograph: Aidan Crawley/The Irish Times

One of Dublin’s most notorious and long-standing vacant plots of land, earmarked for a courts development for more than a decade, could be subject to hundreds of thousands of euro in vacant site levies.

Dublin City Council is assessing the one-acre site owned by the Office of Public Works (OPW) at Church Street in Smithfield for entry on its register of vacant sites, which was set up to stop the hoarding of land that could be used for housing.

The large wedge-shaped site, which stretches from Church Street to Smithfield Plaza and is bordered by the Luas line to the north and Hammond Lane to the south, is understood to be worth €8-€10 million. If it is entered on the register the OPW would be liable to pay levies of up to €700,000 annually to the council from next year.

The OPW bought the site, which was formerly the Maguire and Paterson match factory for £4 million 20 years ago, outbidding several residential and office developers. However, it has since remained vacant.

More than 10 years ago, the site was designated for a new family law and children’s court. Four years ago the then minister for justice Frances Fitzgerald said the complex would be built as part of a public-private partnership, with expected completion in 2020. It was due to cost about €40 million.

However, early this year it emerged that following changes to the project, including the addition of a Supreme Court to the complex, the expected cost had jumped to €140 million. The Department of Justice had budgeted a maximum of €80 million for the project and Minister for Justice Charlie Flanagan last month ruled out meeting the increased costs, although he said he would like to see the project go ahead at “the earliest opportunity”.

The site had been held up by the council as an exemplar of a city centre vacant site when it was arguing in 2013 for the introduction of levies on unused prime development land. However, since the council first published its register two years ago it has not included the Church Street-Hammond Lane site.

Other State-owed lands have been added to the register, including sites owned by the Department of Justice, Health Service Executive, and the city council itself.

Following pressure from city councillors, the council last month said it would assess the site for inclusion on the register. The council said its vacant sites unit has now inspected the site and it has been “deemed vacant”. A follow-up inspection will be conducted in the next two weeks to see if the site is in active use, it said.

The OPW said the site would be used in the near future. “While the site is currently vacant, the OPW is in the process of licensing the site on a temporary basis to a construction company for use as a building compound,” it said.

It is understood builders Sisk will use the site as a compound for construction vehicles and materials during the redevelopment of the neighbouring former Irish Distillers building as an office block.

However, the Department of Justice and HSE appealed their inclusion on the register to An Bord Pleanála and had their appeals rejected.

The HSE owns five late Victorian houses at Grangegorman Villas which are derelict and boarded up. The HSE said it intended to develop the property but there were unavoidable delays because of the “dangerous condition” of the buildings. The Department of Justice has argued that it should not have to pay levies on a site on Old Kilmainham Road, as it offered the site to the council for social housing.