There were no articles on page 1 of The Irish Times in 1886. But the ads told their own story 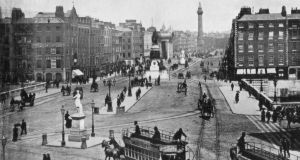 “A home is offered in the House of Medical Man to a Lady or Gentleman suffering from the milder form of insanity, but not requiring the restraint of an asylum,” begins an innocuous classified ad on the front page of The Irish Times on April 5th, 1886; “a beautifully-situated residence in a most healthy locality, about two hours’ rail from Dublin. References given and required. Address Y 554, this office.”

It’s a short notice. But its value for the purpose of gaining a snapshot of life in Ireland in 1886 is worth more than the sum of its 70-odd words.

The placement of the ad situates it in time. Classifieds, for all of the 19th century and a large part of the 20th, typically appeared on the front page. In The Irish Times, that trend explains (what we would now consider) buried reports on the sinking of the Titanic in 1912 and the assassination of Archduke Franz Ferdinand in 1914. Both stories appeared on page seven.

Irish Times readers would wait until 1941 for regular front-page stories. On Friday, April 19th, that year, ads for Arnotts and Lemon’s “pure sweets” sat alongside deaths and marriages in their usual place of prominence. On March 21st, 1941, punters parting with their twopence had their first real taste of a front page headline: “Modified allied front in Greece: Germans surround Mount Olympus.”

The more conspicuous marker of age in the 1886 advert seeking a lodger with “the milder form of insanity” is the language. The words grate on modern sensibilities in a way only Victorian-era journalism can. Terms surrounding “lunacy” in particular now seem intensely unsuitable. Quaint, even. The 1881 census report, for instance, lists the top “moral and mental” causes of insanity as grief, terror, religious excitement, reverse of fortune, love and jealousy, and disappointment. In that order.

In short, those seeking to comprehend the past via the huge treasure trove that is the humble newspaper archive could do worse than begin with classifieds. The historical value of these quirky shorts forms the basis of BBC Radio 4’s Classified Britain series. An upcoming episode focuses on Dublin and spans the few days preceding the introduction of prime minister Gladstone’s First Home Rule Bill on April 8th.

Newspapers in 19th-century Ireland were largely partisan. The Irish Times said as much in its first edition in 1859: “Given the name of public men that endorse any proposed measure or movement, you can predict to a certainty, without troubling yourself at all about its merits, what reception it will meet with from any one newspaper in Ireland,” reads a passage om the first leader, in a pithy summation of the state of journalism at the time.

Divisions are readily visible. As Classified Britain host James Naughtie observes, the selected ads contain “pleas for funds for the Protestant poor in the Dublin Daily Express, but the poor of the Western islands in the Freeman’s Journal”. In fleshing out the items examined in the programme, Naughtie speaks with Eunan O’Halpin, professor of contemporary Irish history at Trinity College Dublin, and Dr Georgina Laragy, Glasnevin Trust assistant professor in public history and cultural heritage.

Political and religious persuasions aside, the front page of The Irish Times on April 5th, 1886, is a colourful mix of commercial and personal. The first posts in the “Miscellaneous” column, like many classifieds, tell different stories of people searching for a particular someone – or something.

The first ad is a few short words about a stripper cow lost at the Templemore fair the previous March. The second addresses “Parents and Guardians”, and is written by “A Gentleman (in business)”. The writer said he would “be glad of an introduction to a Lady with at least £1,000 fortune. Should the introduction lead to matrimony, Advertiser would settle property to the full amount of the Lady’s fortune on herself.” The next ad reads simply: “A young lady, English Protestant, desires an engagement as Companion to a lady; no objection to travel.”

Appeals for relief appear across the three papers, reflecting the level of poverty in Ireland in the 1880s. But in The Irish Times, an abundance of piano ads, notices of yachts for sale, information about art classes and a miscellany of spurious business opportunities speak to a more affluent demographic. An introduction to the stock market “for responsible people” pops up not far from a plug about investment opportunities in Florida – orange groves, in particular, seemed popular. “I suspect there’s a fool born every minute, who will invest their money in God knows where,” Prof O’Halpin tells Naughtie.

No old-timey classifieds page would be complete without an ad for some medical remedy now deemed potentially lethal. April 5th’s poison was a “a nerve tonic, and specially recommended for debility, nervousness, brain-weariness, and sleeplessness.” The substance, “pospho-muriate of quinine”, apparently contained, among other ingredients, a dash of strychnine.

Dotted throughout the page are early clues about advancing technology. JK Fahie & Son, electrical engineers, advertised the installation of “the Electric Light, either on the Arc or Incandescent system”. Similarly, on the top right-hand corner of the page, J Edmunson and Co advertised their position as sole agents for the latest telephone system, “which is entirely mechanical in its operation and consequently free from the annoyances caused by ‘induction’ and ‘interruptions’. . .”

In the finer margins, between intriguing plugs for new brushes, the latest French curiosities, the purest laundries that use “fresh air” and one notice for an “important auction of polo ponies”, can be seen the tinges of tragedy. Naughtie highlights one death notice in particular; that of a baby boy, published in the Express.

The few words on the front page tell the brief story of a “a son who survived but a few hours”. Dr Laragy expands on the death notice from her base at Glasnevin Cemetery – the would-be final destination for many of the Dubliners mentioned in the classifieds. The family of the boy, as it will be recognised from the surname Day-Lewis, is a now a well-known one, and Dr Laragy fills in some interesting genealogical gaps.

But the words tell a bigger story – that of the rate of child mortality. The baby’s death occurred the day before the notice appeared in the paper, meaning it would have been very quickly prepared. Perhaps it had already been arranged, but for the births section.

In a time when world events could take days to appear in Irish newspapers, classifieds provided a speedy turnaround of information. In that sense, the front page was, Dr Laragy tells the programme’s presenter, “like your curated Facebook or Twitter feed”.

Classified Britain airs on BBC Radio 4 at 9.30am on Tuesday, August 20th