Why it is time for a cull of seagulls in Dublin 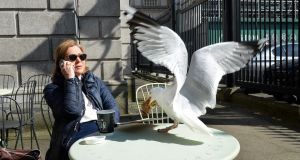 A seagull swoops to snatch a sandwich outside the National Library of Ireland, Dublin. Photograph: Dara Mac Dónaill / The Irish Times

There isn’t anywhere outdoors in central Dublin these days that you can’t see a seagull. They’re literally everywhere – loudly squawking long before dawn, swooping down from rooftops, using their yellow beaks to tear into plastic rubbish bags at street level, taking over stretches of the river Liffey, and displacing the ducks and waterhens in St Stephen’s Green.

And August is the peak seagull season, according to Colm Tóibín.

“What I never want to hear again is the screeching of seagulls”, he wrote in a long piece for the London Review of Books about how he coped with testicular cancer: “They would sail towards the house in groups and start to shriek in the upper air. Then they would move lower and shriek some more. They are scavengers and they love the fact that the centre of Dublin has so many new restaurants. They get fat on garbage.”

It comes out the other end, inevitably. Numerous pedestrians are hit by projectile seagull shit falling from on high every day, and so is every surface in the city, notably slate roofs. Incredibly, these well-fed birds can also defecate at improbable angles, which is why we now have to clean our windows more often.

And if you don’t get rid of it early enough, when the guano is still soft, it hardens to a stiffness that can only be removed with a putty knife.

We watched in horror from our roof terrace in Temple Bar a seagull nesting on the parapet of nearby Barnacle’s hostel, with her mate standing guard on one of the chimneys of Urban Outfitters.

Two “chicks” were hatched in May, brown speckled things already larger than average in size. They waddled along the flat roof demanding – and getting – constant sustenance from their parents until they learned how to flap their wings and fly.

They have now joined the vast aerial army that occupies the city, day and night. Officially, the species is called herring gull (Larus argentatus). Birdwatch Ireland describes it as “a large gull, which in adult plumage has light grey upper wings, showing black tips with white ‘mirrors’ (white at the very tips surrounded by black); the rest of the plumage is white.” That’s why they glow in the dark from the city’s lights reflected on their undercarriage.

Their call is described, in something of an understatement, as “strident and loud”. As for their diet, Birdwatch Ireland says the herring gull is “both predator and scavenger [which] often feeds on the coast and follows fishing boats and uses landfill sites.”

Obviously, Ireland’s premier organisation for bird-watchers has yet to catch up with the fact that, in Dublin, these aggressive over-sized gulls have become major pests for urban life in the city.

Wikipedia is interesting on the herring gull, characterising it as “a social bird that dislikes being alone, and fights mainly occur over food or to protect their eggs and chicks. If three to four birds discover a piece of food, the first one to land by the food piece often unfolds their wings (together with a sound) to proclaim ‘this food is mine’. This is very often opposed by another gull, and during a short fight a third bird may grab the food while the two other are arguing.”

My most baffling discovery, however, was that the herring gull is red-listed in Britain as a “threatened species” and, according to the Office of Public Works (which manages St Stephen’s Green) it’s a protected species under European wildlife legislation.

That latter nugget was in response to a query I had put to the OPW asking whether they couldn’t carry out a major cull of the seagulls, to restore the lake in the Green to harmless ducks.

However, the International Union for the Conservation of Nature merely lists the European herring gull as “near threatened” rather than “critically endangered”, merely “endangered” or “vulnerable”. And that’s from the European Red List of Birds, compiled by BirdLife International.

Thus, it is not clear to this writer that the species is actually protected. And if that’s not the case, a major cull could be undertaken throughout central Dublin.

If the seagulls confined themselves to chasing after fishing boats, there wouldn’t be a problem.

But as anyone who has had a sandwich whipped out of their hand by a ravenous seagull, or had their jacket soiled by what comes out of their rear end, or witnessed a gull scavenging through the detritus of the city, or feasting on a smaller bird – even a pigeon – in public view must surely have wished to have a shotgun to put an end to this plague.