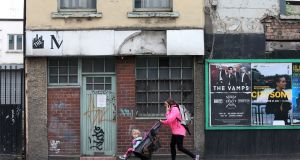 The old Manhattan Cafe on Richmond Road: once a haunt of musicians and all-night revellers. Photograph: Laura Hutton/The Irish Times

An attempt to reverse a Dublin City Council decision to block the redevelopment of the Manhattan Cafe site at Kelly’s Corner near Portobello will be made on Monday.

City councillors, led by former Green Party member Ciarán Cuffe who is now an MEP, last May refused to sanction the €1.4 million sale of lands owned by the council surrounding the former late-night cafe.

A group of councillors from Fine Gael, Labour, Fianna Fáil and Sinn Féin as well as Independent Mannix Flynn, have signed a motion to rescind the previous council’s decision, which was passed by 23 votes to 14.

Charledev Properties, which owns the old cafe, a haunt of musicians and all-night revellers from the 1950s, wants the council site at the corner of Harcourt Road and Richmond Street South as part of a nine-storey office development on lands between Richmond Street and Charlemont Street.

The development company has already been granted permission for the office block, including the derelict properties owned by the council, but could not go ahead with the scheme without agreement of councillors to sell the lands.

The two councillors who had been most vociferously opposed to the sale, Mr Cuffe and Éilis Ryan of the Workers Party, are no longer members of the council. However, all Green Party councillors, most Sinn Féin councillors and two Labour councillors also voted against the sale.

Mr Cuffe recalled “fond memories of the Manhattan and the proprietor who would wake up those who had fallen asleep with a wet facecloth at three in the morning”. He said there should be “better ways to address the regeneration of such sites that have festered for far too long, beyond what is reasonable”.

Ms Ryan said she would like to see other community uses for the site if it was unsuitable for housing.

Council chief executive Owen Keegan had warned that there was a “whole range” of culture and recreation programmes that could not be funded without the sale of surplus council lands.

“Yet every single scheme we bring to this council it’s, ‘oh, we don’t want to sell’. We can’t have these projects in your capital programme without having a funding source – you can’t have it every way,” he said.

The council’s head of planning, Richard Shakespeare, said he would have to review funding for parks, playgrounds and community rooms “and see what projects are going to be delayed or not happen at all”.

A motion to overturn a previous council decision must be signed by at least 12 councillors before it can be voted on.

Labour Cllr Dermot Lacey said he believes the last council’s vote had been “an ill-informed decision” because some councillors appeared to be under the impression the council owned the Manhattan cafe.

“I think we should have a look at it again, it makes no sense not to sell it.”