The first Electric Picnic: ‘We’re going for a mini-Glastonbury’

From the Archive: ‘Despite the promises, the beer and toilet queues proved as frustrating as always’ 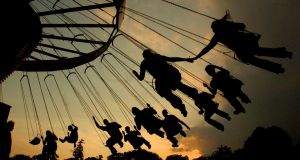 In an article in The Ticket, Brian Boyd spoke to promoter John Reynolds about an unknown entity about to unfold: the first Electric Picnic festival, a one-day event. “This, though, is not aiming to be a mini-Oxegen,” Reynolds said. “If anything, we’re going for a mini-Glastonbury feel. In fact when I showed someone from the Glastonbury festival around the site we are using, he remarked that he could fit the whole Glastonbury festival into our space. We’ve got 64 acres at Stradbally Hall.”

There was surely a bit of promoter hyperbole going on, considering the Glastonbury site is now around 900 acres in size, and at the 2004 Somerset festival 150,000 tickets were sold, not including musicians and other performers, staff, security, volunteers and so on. A bit of a difference between a then 15,000-capacity party in Laois, to be fair.

I’d be looking at acts such as George Clinton and Prince for future festivals, and we are already planning to make next year’s event a two-day one, with camping facilities

The overall size of the Stradbally estate is 600 acres. “This really is us getting our feet on the bottom rung of the concert promoter ladder,” Reynolds said at the time. “We have a 10-year deal for the site, so we’re thinking long-term. I’d be looking at acts such as George Clinton and Prince for future festivals, and we are already planning to make next year’s event a two-day one, with camping facilities available.”

The following weekend, the Irish Times Magazine featured an interview with Thomas Cosby, of Stradbally Hall, who took on responsibility of the property in 1996 when he was 22. The deal he cut with Reynolds was framed as a five-year deal in this article, rather than the 10-year one Reynolds detailed.

“Secure in the knowledge that the Electric Picnic contract will take care of essential repairs,” Caroline Allen wrote, “Thomas and Gesa [Cosby’s partner] are considering opening Stradbally Hall to the public next year. While other couples might cast an envious eye on their abode, Cosby says, ‘the space is great – heating it is the problem. We just heat the couple of rooms we live in. It is a wonderful place to live but a house like this is a mixed blessing’.”

On Monday, September 6th, the review of the festival was in, written by John Lane.

“The final festival of the season got down to its avowed aim of offering a completely new festival experience…It was billed somewhat mysteriously as Ireland’s first ‘boutique’ festival, and in truth Electric Picnic did go some way to redefining the festival experience. Yet despite the promises, the beer and toilet queues proved as frustrating as always, while, at times, the compact layout of the site did lead to some dissonant sonic cross-pollination because of sound spill between stages. Yet these were trifling criticisms that failed to dampen the street-party vibe. In the end, the gardens of Stradbally Hall proved to be the perfect setting for what turned out to be a far cry from your common or garden summer festival.”

Roisin Murphy cancelled her set, as did The Rakes and The Subways.

“The crowd shrugs,” Crawley wrote, “consults their bootlegged schedules and moves on to the feel good reggae of Toots and the Maytals.”

LCD Soundsystem get a shout out (“the hipster’s electroclash group of choice”), before the festival ended, “On a good-humoured Sunday night it feels like the electric dreams of this little enclosed community could last forever. And then, finally, the music ends and the bubble bursts.”

A couple of weeks later the analysis of how Electric Picnic was changing outdoors concerts in Ireland was under way. Jim Carroll was writing in his Discotheque column in The Ticket: “The huge success of this year’s Electric Picnic has changed the lie of the land. Now if you want to go to a multi-day, multi-stage festival with camping in Ireland you’ve a choice. You can go to Oxegen or wait for the Picnic.”

It’s almost amusing to reflect on how binary the festival choice was 14 years ago, given how packed the summer festival calendar is now.

“Of course, both festivals are chalk and cheese,” Carroll wrote, “in terms of potential audience and overall atmosphere, so it’s doubtful if there are many punters who will actually be going to both…It will be interesting to see how the competition pans out next summer. MCD may well try to book every band on the planet for Oxegen. They might put on a Picnic-like event later in the summer. They could even try to buy Stradbally Estate. Whatever happens, though, the real winner should be the Irish music fan.”