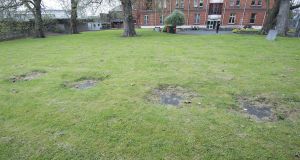 Concerns are growing over the condition of Ireland’s oldest remaining Quaker cemetery, amid disagreements between the Health Service Executive and Dublin City Council over its future ownership.

The cemetery on Cork Street dates from the 1690s and is located in the grounds of the Weir Home, a HSE residential mental health services facility.

Weir Home, named after Scottish philanthropist James Weir who funded its construction, was built in 1903 to accommodate nurses working at Cork Street Fever Hospital. It remained a nurses’ home until the late 1970s.

Since the early 1980s it has been used as a mental health facility, but due to its age and condition, the HSE has decided it is no longer suitable and plans to relocate its residents to a facility at Stanhope Street in Grangegorman, on the north side of the city.

The HSE said the Stanhope Street facility was due to be ready for residents later this year. When Cork Street has been vacated the HSE “has committed to transferring to Dublin City Council (DCC) for ongoing use”.

However, the council said it does not plan to take the building.

It had considered developing the building for emergency accommodation but that plan “has not progressed”, it said.

“We understand the HSE are considering the transfer of the property to one of the approved housing bodies who would likely also be keen to develop the building for emergency accommodation. We would welcome such a development.”

The council added it had “not given any consideration to the graveyard adjacent to the building”.

The HSE said it remained its intention to transfer the entire property to the council once upgrade work at Stanhope Street was finished.

“As soon as the work has been completed those currently in Weir Home will decant to Stanhope Street and the transfer will take place.”

The burial ground at Cork Street was bequeathed in 1697 by Roger Roberts, a Quaker and innkeeper, and remained in use until the late 1860s following the opening of a new cemetery at Temple Hill in Blackrock.

Most of the remaining headstones in Cork Street date from its latter years, with Quakers only allowing physical memorials after 1855, but written records remain of hundreds of burials on the site.

Retired city council planner Kieran Rose said the condition of the cemetery had deteriorated to an extent that was “disrespectful” for a historical burial ground.

“The boundary walls are crumbling, the railings are decaying. There are portacabins and dumpsters strewn about, and the graveyard used for surface car parking.”

Labour councillor Dermot Lacey and Sinn Féin councillor Críona Ní Dhálaigh have both called for action in relation to the neglected condition of the cemetery.

In response, the council said the HSE was responsible for its care and upkeep.

“The site is currently managed by HSE and the graveyard is effectively used as a private garden. Friends [Quakers ]still have a right of access. DCC has no official remit or input in relation to HSE property.”

Unthinkable: How can scientists disagree on basic ‘facts’?
10