When ‘girl students’ joined the priests-to-be in Maynooth

When pressed, the priests-to-be admit that one day there could be a scandal 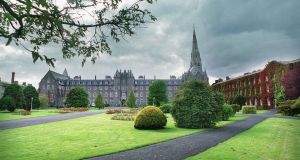 In May 1969 St Patrick’s College in Maynooth, Co Kildare, was causing a stir. Photograph: Brenda Fitzsimons

Ireland, May 1969, and St Patrick’s College in Maynooth, Co Kildare, was causing a stir. An Irish Times journalist paid a visit to the seminary, founded in 1795, and now separate to what became Maynooth University. That journalist was Kay Kent, an arts and features writer who did a strong line in theatre, and wrote for the newspaper in the late 1960s and early 1970s.

“At Maynooth, a time-honoured custom dictates that students who wish to ask their professor a question should send up a note at the end of his lecture,” the article began, “Not long ago, one of these notes read: ‘Please remove the girl in the front row. She is likely to prove an impediment to the vocation of the young man on her left’.”

Nuns were admitted to Maynooth in 1966, “along with the first of the non-resident clerical and religious students”, but the previous autumn, Maynooth had opened its BA and BSc courses “to the laity”, meaning “girl students were automatically included with the men”. The president of the college was quoted as saying “We felt we should move with the times”.

Kent assessed that the president “appears to think this sufficient explanation for what many outsiders may consider a revolutionary move”. By permitting women to study at Maynooth, St Patrick’s became the first seminary in the world to admit women to “regular study and recreational activities” within its walls.

The article said that no random sample of staff or seminarians had any objection to the revolution, “On the contrary, they are enthusiastically in favour of it.” For their part, the seminarians, according to Kent, pointed out “that the old idea of retreating behind high walls is totally unrealistic, since they are going to work eventually in parishes containing people of both sexes who will need their help. How much better, then, to break out of the priest-caste isolation of former days by studying and arguing with lay-men and women within the seminary.

“The harsh dividing line of conjecture and incomprehension has dissolved,” Kent wrote, of the assumed chasms between laypeople and trainee priests, men and women. The Registrar of the college, Fr Thomas O Fiaich “remarks on the civilising influence the presence of a few girls has had on the seminarians, ‘There used to be near-bedlam when you walked into a first year arts class,’ he said. ‘Now, with a sprinkling of girls, I walk in and find them almost subdued’.”

There were criticisms among the students, however, although not exactly the ones you’d think. “The students’ most usual criticism of the new order is indeed that the authorities have not gone far enough in promoting bisexual [it meant something different then] activities. ‘Why can’t we have mixed bathing?’ is the demand from the most extreme section of the seminarians. And the more conservative contend that it is monstrous that the girls should be barred from acting in the Drama Soc. productions merely because the dressingroom space is inadequate.”

You might think that with all that talk, there were floods of young women coming through the gates of St Patrick’s when the ban was lifted. Not so. In 1969, there were 16 women in the college, 11 of whom were on a general arts degree course. The total student population was 620 at the time. Just one of those young women was doing a diploma in theology. The women “strongly deny that they have any social or sexual problems as a result of their proximity to so many clerics and religious”.

Some seminarians, however, were worried. “The priests-to-be themselves admit, when pressed, that there is a possibility that one day there could be a scandal. They accept too that one of their number could find himself caught in a deep emotional involvement with a girl; but they insist that if a man is not capable of leading a celibate life, it is better to discover it in time.” If only the “scandal” of the Catholic priests in Ireland was as innocent and normal as young men and young women dating.

“Maynooth priests from now on will come from a new, more liberal mould,” the article determined. But what about that note? The lecturer had his theories. “At first I thought someone was just codding; but I’ve come to the conclusion that it was probably serious. It could have been written by a rather old-fashioned nun.”