Rathmines house ‘more of an army HQ than a home’ 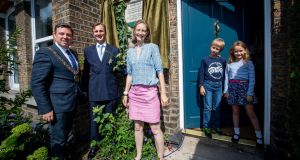 Sitting inconspicuously in a terrace of Victorian red-brick houses on a south Dublin road is Surrey House, a one-time nerve centre of Irish republicans and romantics.

The former home of legendary Irish patriot Countess Constance Markievicz would have been easy to walk past without knowing anything of its storied past, steeped in the history of pre-1916 planning and intrigue.

From Monday, however, the house at 49b Leinster Road, Rathmines is marked by a plaque, unveiled by Dublin’s Lord Mayor, Paul McAuliffe: “This house was less a family home and more a base for activism,” he said.

Listing the nationalist organisations whose members came and went from the house, he said: “[She] turned away from her privileged background and devoted her life to the struggle of Irish freedom and importantly, social justice.”

It was at Surrey House that she built up a small clique that consisted of youthful and loyal members of Fianna Éireann, the Irish National Boy Scouts, founded by Markievicz and Bulmer Hobson in 1909. Some scouts even moved into the house, though older members of the Irish Republican Brotherhood warned her that the “Surrey Clique”, as it became known, would bring unwanted attention.

Since 2016, Dublin City Council’s commemorative committee has been marking places of significance relating to the Easter Rising, and plaques have already been placed at all of the garrison sites.

Built in 1867, Surrey House was Markievicz’s home between 1912 and 1916 and was identified in a notorious Dublin Castle document “as a house to be raided and occupied”, said the Lord Mayor.

The house became a particular favourite of not just well-known republicans, but labour activists, journalists and artists from Markievicz’s wide social circle. A visiting French journalist remarked that it was “more of an army HQ than a home”, records Eamon Murphy, who has written extensively on the history of Fianna Éireann.

The house was, he has written, watched by G-men, plain-clothes officers from Dublin Castle, which led to another visitor claiming that it was the best guarded house in Dublin, with “detectives on the outside and Fianna boys on the inside”.

One of the rifles landed by the Asgard in the Howth gun-running in 1914 was tested in the back garden, but it “unfortunately” attracted the attention of well-to-do neighbours in what was then a majority unionist middle-class neighbourhood.

Seán Prendergast, a frequent visitor, recalled the house and its inhabitants “being looked on with condemnation and disgust by the law-abiding and respectable neighbours”.

Markievicz ran an illegal printing operation from the house, distributing leaflets with the help of the Fianna volunteers arguing against British army enlistment and other issues.

During the 20th century, it was converted into bedsits like many large period houses in the Rathmines suburb, before it was bought by James McCarthy five years ago. He and his wife Liza Kelly faithfully returned the “Surrey House” name to the front gate and set about restoring its interior.

“We came in and kind of returned it to a family home,” said McCarthy. “We have tried to be very respectful to the history.”

Its wooden floorboards, cornicing and even some of the doors are original – the very fittings and fixtures that bore witness to the plotting of Irish republicans. Kelly said they are used to the small groups of visitors and school tours that gather outside their gates – even before the official commemorative sign the house’s history was relatively well known.

“Now with the plaque I think we might get a little bit more attention,” she said.