Saoirse Ronan, a self-assured cover star since the age of 13

The 25-year-old actor preserves all the wit, smarts, and decorum she displayed a decade previously 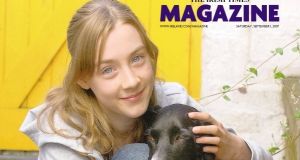 Saoirse Ronan on the cover of The Irish Times Magazine in September 2007.

New stills from Greta Gerwig’s film adaptation of Little Women recently showed Saoirse Ronan as Jo March. It’s probably the perfect role for Ronan. With Gerwig, she has a kindred spirit, and the two couldn’t speak highly enough of each other during the promotion of Gerwig’s brilliant Lady Bird. It’s Ronan’s 23rd major film role in a storied career. But what’s remarkable is how young Ronan, an extremely established actress, still is – just 25. Flashback to 13 years ago, and the Irish media was just about beginning to notice her.

Ronan was first mentioned in The Irish Times by Michael Dwyer, on June 23rd, 2006, with news that she had been cast in a highly anticipated adaptation of Ian McEwan’s novel, Atonement. It would be a role that would change Ronan’s life forever. “Cast in the crucial role of Cecilia’s 13-year-old sister Briony,” Dwyer wrote, “is Saoirse Ronan, who had recurring roles in the RTÉ series Proof and The Clinic, and recently joined Michelle Pfeiffer, Paul Rudd and Tracey Ullman in Amy Heckerling’s romantic comedy, I Could Never Be Your Woman.” Dwyer mentioned Ronan again in December 2006, pointing to Atonement’s release date the following year, September 2007.

In July 2007, the newspaper ran a story about Ronan landing “the coveted central part in the new film from Peter Jackson, the Oscar-winning director of the Lord of the Rings trilogy.” The journalist wrote, “Securing such an important role continues the meteoric rise of the young Irish actor over the past four years. She has been chosen to play Susie Salmon, a young girl who is murdered but continues to observe her family on earth after her death, in The Lovely Bones. The film will be based on the 2002 best-selling novel by Alice Sebold.”

Another piece on July 20th by Dwyer in The Ticket detailed more films in the pipeline for Ronan, “She joins Guy Pearce (as escapologist Harry Houdini) and Catherine Zeta-Jones in Death Defying Acts, and Joely Richardson and Tom Berenger in The Christmas Miracle of Jonathan Toomey. She is now working with Bill Murray on the science-fiction adventure City of Ember, which is shooting in Northern Ireland.”

On September 1st, Ronan was on the cover of The Irish Times Magazine with her dog, Sassie. The interview, written by Róisín Ingle, demonstrated Ronan’s maturity and intelligence, but also reminded readers about how young she was on her path to stardom, “I am away a lot, so I miss out,” Ronan said of school, “People say ‘Do you remember when that happened? Oh no, you weren’t here.’ It’s strange, but I get to do what I love and then be at home in Ardattin, which I also love. It’s like that Hannah Montana song ‘Best of Both Worlds’.”

Had her wits about her

Ronan already had her wits about her, “I don’t like people who are over the top,” she said, “who keep asking how are you today, saying ‘You’re so cute’, and all the rest. I’ll say to mam, ‘I’m not sure about her or him,’ but most of the time everyone has been brilliant. I’ve been really lucky.” Two weeks later, Michael Dwyer reviewed Atonement, giving it five stars – “and young Carlow actress Ronan, demonstrating a distinctive, perfectly understated screen presence,” he wrote.

On December 14th, 2007, the Irish Times brought news of Ronan’s first major award nomination for best supporting actress in the Golden Globe nominations announcement. In his roundup for the films of the year, Dwyer put Atonement at number one of his top 20 films, and named Joe Wright as the director of the year, and Ronan as most promising Irish actress. By December 28th, Dwyer was reporting that she was a likely nominee for best supporting actress at the Academy Awards.

Cut to two years later, and Rosita Boland profiled Ronan, then aged 15, in a piece in December 2009. “Saoirse Ronan can’t remember the first time she met Brad Pitt,” Boland began the article, “Or the second, or the third. That would be because actress Ronan was an infant at the time. Her actor father, Paul Ronan, was working on The Devil’s Own, which starred Pitt and Harrison Ford. Daddy Ronan often brought his baby daughter on the set with him, and she was cooed over by all the cast, including Pitt.”

In February 2010, there was another Irish Times cover, this time on The Ticket with an interview by Donald Clarke. Clarke described a 15-year-old eating a plate of pasta on a giant sofa, “I have only recently heard about the business of media training,” she told Clarke, “I never had any. My dad did maybe give me a few pointers about how to answer questions – and what subjects to avoid.”

As one of the most talented actors of her generation, what’s interesting is how low-key coverage of Saoirse Ronan has been. The 25-year-old today seems to preserve the wit, smarts, and decorum she displayed a decade previously.