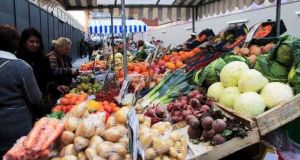 Moore Street market in Dublin. The report says the 200-year-old market is in a “vicious circle of decline”. Photograph: Getty Images

Dublin’s Moore Street market is facing “an existential crisis” and is at imminent risk of closure unless a regeneration programme is put in place, according to a Government-appointed advisory group.

In a report to be submitted to Minister for Culture and Heritage Josepha Madigan next week, the Moore Street Advisory Group has warned that the “neglect” and “decay” of the markets and the National Monument buildings connected to the 1916 Rising must be halted as a matter of urgency to ensure their survival.

The advisory group, which includes TDs, councillors, Moore Street traders and representatives of 1916 relatives, was set up by the Government in 2017 to achieve consensus between stakeholders, including the new owners of the Dublin Central Site, Hammerson, on the future of the area.

Its report has broadly welcomed Hammerson’s new plans for a retail, office, hotel and residential development on a site which stretches from O’Connell to Moore Street.

However, it has called for immediate action from Dublin City Council and the Department of Heritage in relation to the street market and the National Monument buildings.

The report is particularly scathing of the neglect of the 200-year-old markets, which it says are in a “vicious circle of decline”, with a lack of basic facilities such as toilets and inadequate power, water, lighting and cleaning.

“Against such a stark background of urban decay and neglect, the fact that new trader licences have not been issued in recent years by Dublin City Council underpins an unsatisfactory relationship between the traders and the council where the council’s long-term intentions towards the market are not clear.”

A new expert group, under the aegis of the council, should be established to lead the market’s regeneration, the report recommends.

“The Moore Street market is facing an existential crisis. If it is not fundamentally re-imagined and regenerated around a compelling future vision it will almost certainly go under.”

Social Democrats councillor Garry Gannon said the report made clear there could be no delay in redeveloping the markets.

“The markets are almost at a point of no return. If their development does not go ahead before the development of the nearby Victorian fruit and vegetable market it will put the traders out of existence.”

While the report acknowledges that legal proceedings in relation to buildings related to the 1916 Rising were not resolved until last year, it was essential there were no further delays in “securing the fabric” of the National Monument at 14-17 Moore Street.

The monument should be opened to the public so it can “insert itself into the public consciousness as soon as possible in this Decade of Centenaries”. Its current state “poorly reflects the presence and poignancy of the buildings in the events of Easter Week 1916”.

A “symbiotic relationship” between Hammerson, the National Monuments through the State, and the market traders was vital, the report concludes.

“The challenge for the quarter is one of reversing years of dereliction, decline and official neglect.

“This must come from effective partnership between the private owners, the State sector and the street traders, who together can create an attractive, vibrant, urban quarter which celebrates the unique contribution of the quarter to the memory of the events of 1916 and equally provides a livelihood for those who live and work in the area.”