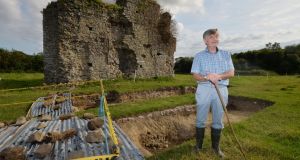 John McCullen at the excavations of a 13th-century monastic site on his farm at Beamore, Co Meath. The excavations are being funded by FBD. Photograph: Alan Betson/The Irish Times

A medieval window found by a farmer in his field has been the key to discovering what is regarded by historians as “hugely significant” remains of a Cistercian settlement in east Co Meath dating back to the 13th century.

The existence of Cistercian monks locally has been documented over the centuries, but the actual location where they lived has not been known until now.

Archaeologists Matthew and Geraldine Stout, who are leading the excavations, have described what has been found at the site in Beamore, Co Meath, just outside Drogheda, as “quite exceptional and very possibly unique to Ireland”.

It all began with local landowner John McCullen’s persistent inkling that there was something of significance about the ruins in his field. His family have been farming at Beamore for over 200 years and the local historian and author remembers looking out on the ruins all his life.

“I remember my aunt once telling us as kids that there was a monastery there but didn’t think anything of it,” he said.

“About 25 years ago, I had a few lads working for me when the top window fell off this building and I noticed red sandstone, which is not found locally. I asked the lads to put the window back up but they had all kinds of excuses so I climbed the 30 metres or so myself to re-insert it. I also noticed some old pigeon boxes which I found out since were used by people in the 16th and 17th centuries who used to eat pigeon and the eggs. So I thought it might date back as far as that.

“In 1720, a rich landlord built a Georgian house in the field and bulldozed everything away and used stones from the original site for his house. There was also a linen mill there at one stage so you had three different stone structures in one area to add to the confusion.”

It was only through meeting Ms Stout, who had a keen interest in the history of Cistercians in Ireland, that Mr McCullen decided to try to get excavations undertaken in his field.

“Geraldine had excavated at Bective Abbey in Meath, which was also home to the Cistercians, and she was very interested when I told her” about Beamore, he said.

“I decided to approach the FBD Trust for funding and, thankfully, they agreed to fund €50,000 over a three -year period on the basis that the first month-long dig uncovered results.

“I’m delighted. I knew in my heart and soul that there was something special about the ruin and now we’ve found it.”

It was when Ms Stout’s research found historical references to Cistercians trading 13th-century produce back to the “mother house” in France that she realised Beamore could be a “very significant site”.

“An enormous amount of planning and research went into this dig. We carried out geophysical surveys around the area and came up with research questions even before a sod was turned on the ground,” she said.

“We knew this monastery was somewhere in the area, but you are talking about hundreds of acres of land. It was the medieval window that was the key to it. The geophysical survey indicated earlier buildings that were not marked on 19th-century maps, and monumental walls suggested a building larger than a house.

“Our job as archaeologists is to reconstruct how people lived through what they left behind. The French pottery told us that there was a link to France and that we were in the right place. The discovery of a corn-drying kiln and preserved wheat, oats and peas indicated the practice of crop rotation, which the Cistercians brought to Ireland.

“They were also famous for their gardens, and we unearthed plum stones as well as blackberries and elderberries.”

Puzzling features of the building’s architecture were solved by two of Ireland’s foremost medieval building archaeologists, David Sweetman and Con Manning, who noticed a diagonal French buttress (wall to support another wall) was “very rare, if not unique, in Ireland”.

“What is quite exceptional is that a whole community came all the way from France and set up in Ireland to farm,” explained Ms Stout.

“Other Cistercians came here and founded an abbey with model farms around it but this community’s abbey was back in France, to where they exported their produce via Drogheda’s very busy port. I can’t think of any other place in Ireland that the Cistercians farmed here and maintained such a close relationship with their abbey in their homeland.

“It’s a big site but we struck gold almost straight away and filled a shed with medieval pottery and artefacts, which will now go for post-excavation work.

“Archaeology is not about finding treasures but finding answers to research questions, but I think in this case we’ve hit the jackpot on both fronts and we’re really looking forward to getting back there next year.”