Thirty-five girls died in the 1943 fire. All the nuns survived

From the Archive: ‘Little girls stood at the windows of the burning building crying to be taken out’ 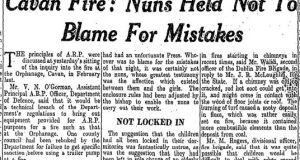 On Friday, April 9th, 1943, reporting on the inquiry into a fire in Cavan gave Irish Times readers a more comprehensive picture of the events that had unfolded a month and a half previously.

“Remarkable stories of their efforts to rescue children from the blazing orphanage in Cavan, in which thirty-five girls and an old woman perished, on the morning of February 24; of baffling delays, and of inadequacy of equipment, were told to the Fire Tribunal in Cavan yesterday, the second day of the inquiry,” the report read. “How little girls stood at the windows of the burning building crying to be taken out, while thirty feet below several young men vainly were endeavouring to raise a ladder to them, was described by Kevin Lee, a night porter in the Surgical Hospital, a short distance from the Poor Clare Convent buildings, in which the Industrial School stood.”

A night porter told the tribunal how he heard noise and cries at 2am, and how a little girl opened the gate and allowed him and two other men into the convent. He saw smoke on the first landing, where a dormitory door was open and all the beds were empty. Upon returning to the ground floor, he saw a nun opening the door to the laundry, and dense smoke pouring out. Children were standing at two of the top windows, screaming.

“Others inside were coughing and shouting: ‘Take us out; we are burning, we are suffocated.’” Two children tried to jump from the top windows. One hit a shed. The other hit a ledge of a wall before hitting the ground. A ladder was produced but it was too short. An extension ladder was then sourced, and four children managed to escape from one window, and five from another. Ladders would become central to the tribunal. One failed to extend, another had tangled rope rungs.

A man named Louis Blessing also gave evidence, saying he saw children on the window ledges trying to escape the fire. “I felt so powerless,” he said. The tribunal members visited the convent to take evidence from the nuns, an unusual step that allowed the nuns avoid obtaining a dispensation from their enclosure vows.

An inspector from the Department of Education told the tribunal that “the Cavan school was extremely well-managed, and the relations between the community and the children were unusually affectionate. He was satisfied with the means of escape.”

On April 13th, the newspaper reported on the evidence given by some of the surviving children, who told the tribunal how “after being roused, and with, in some instances, their slips wound around their heads, they went into a pantry near the burning laundry and said half of the Rosary before a nun found them and brought them to the safety of the chapel.”

On April 14th, Bridget O’Reilly, a domestic science teacher at the orphanage said: “Something snapped in my head, and I lost my mind,” when asked why she could not succeed in bringing the children to safety out of the dormitory of which she was in charge. “I suppose I was afraid to being them out in the dark and the smoke,” she told the tribunal, saying that the fire-escape door was locked and she did not think to pull the bolt to open it.

On April 28th, a headline ran, ‘Cavan Fire: Nuns Held Not To Blame For Mistakes’, with Mr PJ Roe KC remarking that they had “been subject to a great deal of criticism, had been the victims of a number of rumours, and had had an unfortunate press”.

The tribunal issued an official condemnation of the County Management Act, and called for mandatory legislation that improved fire-fighting practices. The Act “left it in the hands of local councils”, a front page story in The Irish Times ran in October 1943, “to say whether the country ought, or ought not, to be provided with an effective fire-fighting organisation”.

The tribunal didn’t apportion blame, but subsequent reporting, including more recent radio and television documentaries, claimed the children could have been evacuated, but that some nuns were concerned about the girls being seen in their nightgowns.

All of the nuns escaped.