The Down files: Operation to blow up reservoir was revenge for Belfast pogroms, pension documents reveal 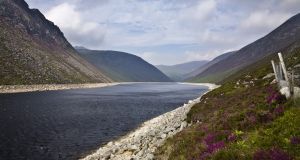 An audacious IRA “dam buster” plan to plunge Belfast into a drought by blowing up a reservoir in the Mourne Mountains during the War of Independence was botched by damp dynamite and a running gun battle, newly disclosed military documents reveal.

Although the reservoir was in its early stages then, it still supplied most of Belfast’s running water.

According to his claim for a military pension, Hugh O’Hagan, officer commanding 1st battalion, 2nd Brigade, 4th Northern Division, said the operation was in revenge for the Belfast pogroms at the time.

Interviewed by the Military Pensions Board in 1936 about his service, O’Hagan, from Attical, Co Down, was asked about the purpose of the Silent Valley operation 15 years beforehand.

“The bursting of the dam,” he said in his sworn statement.

O’Hagan said about 60 volunteers were involved – mainly from Attical, Ballymartin and a few from Kilkeel – and that they set off about 9pm the previous night, trekking six miles over the mountains to avoid a barracks on the main reservoir road.

They arrived at their positions “shortly before sunrise just when it was getting clear”, prepared for a two-hour operation.

“We crept up in the haze of the morning. It was not what you would call very clear.”

The volunteers “burned all the buildings of the commissioners”, including the commissioner’s house and the valve house, which were all empty at the time, according to O’Hagan.

They also “filled the pipes with all the stuff they could get. Cement and stones and iron.” But the attempt to burst the dam “didn’t succeed”, he said. “The dynamite was damp.”

O’Hagan told the board the operation was “ordered specially”. “It was more or less as a reprisal for the Belfast pogroms,” he added.

By then, he had taken about 17 of his men to a spot behind boulders on the side of a hill, where they could see eight or nine B Specials – a quasi-military police force patrolling the area below. They were taking up position “on the right of the old walls of the old house . . . the control place”.

A lorry of reinforcements for the B Specials had arrived from Kilkeel Barracks by about 7am and they took cover behind two lorries as the IRA “opened fire from a distance of about 200 or 300 yards”.

The B Specials “returned fire” and a running gun battle “lasted about an hour”.

Worried that more reinforcements might be surrounding them and running out of ammunition, O’Hagan ordered his men retreat.

Although none were caught, O’Hagan said the “enemy” got “very, very active” afterwards and “they raided a lot”. “They picked up at least 20 men out of our district,” he said, indicating they were arrested.

Separate military pension claim files for Hugh Edward Halpenny note a previous attempt to cut off Belfast’s water supply on Christmas Eve, 1920, which was apparently thwarted by the intervention of a bishop. Halpenny wrote that his part in the action “was to dislocate the water supply to Belfast, which ran, and still runs, from the Mourne Mountains to Belfast”.

“I had all arrangements that were possible for a probable successful action as far as my part was concerned when at 3pm on Christmas Eve ’20 I received a dispatch instructed to report in person to a staff meeting at St Malachy’s College at 9pm that night.”

When he arrived, he discovered the operation was cancelled following an intervention by the Bishop of Down and Connor, Joseph MacRory, his file notes. MacRory, a staunch opponent of partition, went on to become Archbishop of Armagh and a Cardinal.