The Revolution Files: Killing happened during a mass shooting in a Protestant village in Armagh 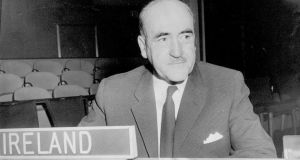 An IRA volunteer tormented by the “accidental” shooting dead of a mother of a large family in a planned massacre of a Protestant village in Co Armagh complained he couldn’t sleep and suffered with his nerves for years afterwards.

James Marron was among about 30 men ordered to carry out a mass killing at Altnaveigh, near Newry, in June 1922, in what became one of the most controversial IRA attacks of the era.

According to Marron’s claim for a pension, the volunteers carried out a “reprisal attack” after two of their comrades were “done to death” outside Newry by the B Specials, a quasi-military constabulary at the time.

“I accepted and it was past the time for us to get some of our own back,” wrote Marron.

Each of the men was given a rifle and 250 rounds of ammunition, and walked four miles from Ravensdale, Co Louth, to Altneveigh, which he described as “a stronghold of the B Force Murder Gang , the crowd who done in our two men”.

“Our orders were to burn every house and shoot dead every male we could get,” he wrote.

“We burned 12 houses to the ground and shot dead eight of the B men. But the unfortunate part of it all was, we shot dead one woman (accidentally), the head of a large family. This got on my nerves and preyed on my mind.”

In fact, six people, including a father and son and the woman, were killed in the attack, which occurred during a truce, by volunteers under Frank Aiken, who went on to become a long-running tánaiste and minister for foreign affairs in successive Fianna Fáil governments.

The truce, which came into force on July 11th, 1921, between the British and the IRA was not observed in a lot of cases north of the border, where the IRA continued to engage in tit-for-tat killings with the security forces.

Northern units of the IRA were covertly encouraged by Michael Collins to destabilise the new Northern state, but operated in hostile circumstances, especially in unionist-majority areas.

Marron said when they got back to Ravensdale he was “exhausted and in a state of collapse”.

After this, he said had to go home “and for a long time I could not sleep thinking of the woman and the others we shot”.

Marron said he developed nerve paralysis on the left side of his face as a result.

By 1923, he was taken under the care of a Dr Flood, who for years later he still visited “as I get upset periodically with stomach and nerves”.

“My concentration and retention is not good by any means,” he wrote.

“When I try to concentrate my face (left side) gets stiff after a while; the same when I try to remember. When I get a cold it upsets me a lot as my eye (left eye) runs water. The months of January, February, March and April are the worst on me with the stiffness of my face.”

Patrick Freyne on Christmas ads: ‘No one belongs on the naughty list.’ This should be big news
4

Hands off the Toy Show: Why the Grinch can’t steal our Late Late Christmas
7