The Revolution Files: O’Duffy went on to become IRA Chief of Staff, Garda commissioner and founder of the Blueshirts 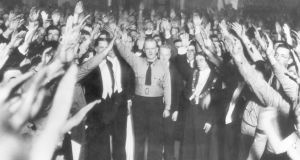 Circa 1935: Eoin O'Duffy at a rally of his Blueshirts. To his right is Alfred Byrne, the Lord Mayor of Dublin. Photograph: Hutton Archive/Getty

The capture of Ballytrain Barracks in Monaghan by the IRA in February 1920 brought the name Eoin O’Duffy to prominence. Then O/C of the IRA’s Monaghan Brigade, O’Duffy went on to become IRA Chief of Staff.

Monaghan’s IRA brigades were active during 1919-1921, with records showing involvement in several attacks on the Royal Irish Constabulary and Black and Tans, leading to nine deaths.

The best-known operations include the capture of the RIC Barracks at Ballytrain on February 14th, 1920, an attack on a police patrol at Ballybay on new year’s day, 1921, during which one policeman was killed and an ambush near Stranoden on January 22nd, 1921, in which three policemen aged 18, 19 and 24, all ex soldiers, were killed.

Historian Lorcan Collins records the attack on Ballytrain was planned at a meeting attended, among others, by Ernie O’Malley and O’Duffy. IRA GHQ had sent O’Malley to Monaghan in early 1920 as an organiser who travelled from one company to another across the county.

About 30 volunteers were involved in the Ballytrain operation, which lasted about four hours on the night of February 14th. The RIC garrison were captured after a mine explosion caused the gable wall of the barracks to fall in. All of the garrison’s arms and ammunition were seized.

Collins also notes that O’Duffy accidentally shot off one of his fingers during the War of Independence but later tried to claim the Tans were responsible.

O’Duffy went on to become Garda commissioner in the new Free State but was sacked by de Valera when Fianna Fáil came to power in 1932. He later formed the Army Comrades Association, or Blueshirts, to fight against the republican side in the Spanish Civil War.

Brigade Activity Records for Monaghan show more than 1,000 men were active in the IRA there during 1921.

Casualties of the war included RIC constable Michael Francis Malone, who died on Main Street, Ballybay, when IRA gunmen opened fire on a police patrol on the night of January 1st, 1921. Three auxiliary policeman were wounded. The body of a civilian was also found close by.

The IRA was also involved in attacks on barracks and other ambushes of police patrols, including near Tullyvaragh on May 31st, 1921, when one policeman was killed.

The records also refer to a general raid for arms on the “enemy population” in the area in August 1920, as well as raids during 1920 for enemy mails and “enemy employees” of the Great Northern Railway at locations including Glaslough railway station.

The boycott of Belfast goods, authorised by Dáil Éireann, was “intensively” enforced by Monaghan IRA as were the decrees of the Sinn Féin courts. As in Cavan, the republican courts were supported by both the Catholic and Protestant communities.

Brigade Activity Records refer to raids for arms at various houses, apparently of Protestant families, in Monaghan in August 1920, which resulted in fatalities on both sides.

IRA members faced armed resistance at two houses in Silverstream, where two shotguns and some cartridges were seized. One IRA man, Owen Keenan, was killed when the IRA raided the home of Sam Moore, near Stranoden. A reference to a fight at Millar’s and Crawford’s during a general raid for arms notes a man was killed while another man was killed during a fight at Moffett’s.

The village of Drum is described as “hostile” in a record of an arms raid there in June 1920 and the records refer to “shooting spies and informers” at Tullycorbett, Drumgarra and Lattan in April 1921.

Cumann na mBan members were also involved in supporting the republican war effort in Monaghan. Among the most active was Rose Agnew of Corrybracken, Carrickmacross. In a 1938 letter seeking a pension, Ms Agnew said she had been a widow since 1930, had no means and was living with her brother. She was “even denied the widow’s pension because my husband died in Scotland”.

“I saw the name of one lady holding a prominent position in 1922. Yet she was married at this time to a Black and Tan and living in England, ” she wrote to the Military Pensions referee.