How Irish women won the right to vote in 1918

After decades of campaigning by the suffragettes, a 1918 Act gave a limited cohort of women the right to vote in parliamentary elections 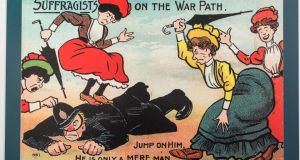 A few years ago, I had the privilege of meeting Eric Hobsbawm, the late eminent left-wing historian, and took the opportunity to ask him what he believed was the most significant revolution of the 20th century. Without hesitation he answered: “Undoubtedly, the women’s revolution.”

Ireland played its part in that revolution, and that is something to be proud of. It’s instructive to reflect that the two greatest human rights achievements in the west in the last two centuries – the achievement of suffrage for women and the achievement of civil rights for people of colour – were both achieved largely without violence on the part of their supporters.

Mary Wollstonecraft’s Vindication of the Rights of Women, published in 1792, is regarded as the first feminist text, although the term “feminism” was not yet in use at that time. She emphasised the importance of education in advancing the cause of women. Anna Doyle Wheeler and William Thompson were Irish feminists in the 1820s, who focused on the slave-like condition of married women.

John Stuart Mill, the British MP and utilitarian philosopher, introduced the first bill in parliament in 1866, seeking extension of the franchise to women on the same conditions as men, for which, amazingly, 73 male MPs voted. Mill wrote The Subjection of Women, a hugely influential text, published in 1869.

In the 1870s in Ireland, women laboured under a variety of legal, economic and cultural constraints:

– Women could not vote in local or parliamentary elections;

– Women could not be members of public boards or local authorities;

– Women were not expected or encouraged to earn their own living;

– Education for women was considered unnecessary and undesirable;

– On marriage, a woman’s property became that of her husband;

– Women had legal custody of their children only to seven years of age.

The first wave of Irish (and British) feminism campaigned on all of these issues, and won them all.

The Intermediate Education Act of 1878 and the Royal University Act of 1879 provided for second- and third-level education. The Married Women’s Property Act of 1882 gave married women, for the first time, a separate legal existence to that of their husbands. The Infant Custody Act of 1873 allowed mothers to petition for custody or access to children below the age of 16. The Matrimonial Causes Act of 1878 allowed women to obtain a protection order from a magistrates’ court against violent husbands.

The Contagious Diseases Acts of 1864, 1866 and 1869, which allowed any woman suspected of being a prostitute to be arrested and forced to undergo medical examination by the police for venereal disease, were successfully repealed in 1886, after an extensive campaign which focused on the Acts’ violation of women’s human rights.

Two of the major activists involved in these highly successful campaigns, as well as the struggle for the big prize – the parliamentary vote – were Isabella Tod, a Presbyterian based in Belfast, and Anna Haslam, a Quaker from Youghal. In 1871, Tod organised the first suffrage society in the country, the North of Ireland Women’s Suffrage Committee, and her speeches were widely reported in daily newspapers in both Ireland and England. Haslam, with her feminist husband, Thomas, founded the Dublin Women’s Suffrage Association in 1876, which ultimately became the Irish Women’s Suffrage and Local Government Association. Tod and Haslam’s methodology was steady, peaceful reformism: make friends in parliament, table bills, get up petitions, hold meetings with prominent speakers, fundraise and raise general consciousness of women’s issues.

The efforts of these and other campaigning suffragists bore fruit in Ireland in 1896, when Irish women fulfilling certain property qualifications were allowed serve as Poor Law guardians, and in 1898 when qualified women were allowed to vote in local elections and to be elected to rural and urban district councils. By 1899, Ireland had 85 female Poor Law guardians, 31 female rural district councillors, and four female urban district councillors. The focus now shifted decisively to the achievement of the parliamentary franchise.

The Irish Women’s Franchise League (IWFL) was established in 1908 by Hannah Sheehy-Skeffington, among others, with more militant strategies than its predecessor bodies. The Irish Citizen, the newspaper of the IWFL, was founded in 1912, with the motto: “For Men and Women Equally, The Rights of Citizenship; For Men and Women Equally, The Duties of Citizenship.”

This newspaper, which continued to appear until 1920, was a valuable organ for suffragists in a period when the mainstream press was often hostile to them. It is a treasure trove of journalism on all kinds of subjects, including domestic violence, treatment of women in the courts and in prison, and the raft of abuses taking place behind closed doors in early 20th-century Irish society. And it has fabulous ads for shops and restaurants which supported votes for women.

Hanna Sheehy married Frank Skeffington, a convinced feminist and pacifist, in 1903. Their relationship was well ahead of its time in terms of equality (he formally took her name and added it to his own), and in many ways it mirrors that of the Haslams. Frank’s murder by a British officer in 1916 was the most devastating event of Hanna’s life.

The IWFL was a more militant organisation than its predecessors. Modelling itself on the British Women’s Social and Political Union, founded by Emmeline Pankhurst in 1903, and dedicated to “deeds, not words”, its members engaged in breaking government windows, getting arrested, and going on hunger strike until released when too weak, then re-arrested when recovered.

Activists in the north were far more militant than their sisters in the south, engaging in arson, telegraph-wire cutting, bombings (they bombed a stained-glass window in Lisburn Cathedral) and digging up golf courses, as well as the usual window-breaking.

The complicated connections between the different kinds of suffragism and feminism, between Unionism, Home Rule and separatist nationalism, and between supporters of the first World War and pacifists made the Irish situation very interesting. As in Britain, the outbreak of the war created a defining moment: most suffragists stopped campaigning and began, as Rosamund Jacob, the Waterford suffragist, said, “knitting socks etc”.

Mainstream Irish politics was largely hostile to the suffrage cause. The Irish Parliamentary Party and the Ulster Unionist Party both opposed female suffrage, and Sinn Féin was divided on the question, with Arthur Griffith sticking to the line that nationalism took precedence over feminism. But, of course, we were dependent on the British parliament to grant Irish women the vote, and in 1918, it did, but with restrictions.

The Representation of the People Act of 1918 gave a limited cohort of women the right to vote in parliamentary elections for the first time. The first World War in many respects was the central context to the passing of the Act. There was concern within government circles in the final years of the war that without electoral reform, many soldiers and sailors would return to a country they had defended but in which they did not have a vote. The corollary of this thinking was that a bill to enfranchise all men on the basis of active service must also include women who had served their country during the war.

The Act granted universal male suffrage over the age of 21, and enfranchised women over the age of 30, subject to a property qualification. Men who had seen active service could vote from the age of 19.

Women could vote if they were university graduates, if they were householders, meaning that they were on the local government register, or were the wives of householders, occupiers of land or premises (not being a dwelling-house) of a yearly value of not less than five pounds.

The consequences of this were as follows: some women were still defined in terms of their husbands; not all women over the age of 30 were enfranchised; many young women who would have worked in the Land Army, on the buses, and in the munitions factories were not enfranchised; many young women who were active in the suffrage cause still found themselves classed as unfit to exercise the parliamentary franchise.

Two women stood for election in Ireland in December 1918: Constance Markievicz for St Patrick’s Ward in Dublin and Winifred Carney for the Victoria Ward in Belfast. Sinn Féin was not interested in proposing female candidates– Winifred Carney’s campaign was for an unwinnable loyalist seat – and the Cumann na Teachtaire, the League of Women Delegates established in 1917 to promote female candidates, encountered much opposition.

Markievicz was the only woman elected to the House of Commons in 1918. She had huge visibility as a 1916 survivor, and was very well-known for her work with the poor in Dublin, particularly during the 1913 Lockout. She did not take her seat in Westminster, and instead became minister for labour in the first Dáil.

The full parliamentary franchise was granted to women in 1922 under the provisions of the independent state’s new constitution. Women in Britain had to wait until 1928. Women in France would have to wait until 1945. When Simone de Beauvoir was writing The Second Sex, she couldn’t vote. What Irish women did with the vote when they got it was to vote on party political lines, like their husbands, and not as a bloc to advance women’s issues.