Armistice Day: The forgotten Sligo men who never came home from the war

Time of My Life: Simone Hickey on discovering the men who went to war 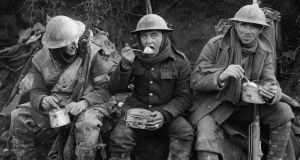 British soldiers eating rations in the Ancre Valley in France during the Battle of the Somme, October 1916. Photograph: Lt. E Brooks/ IWM via Getty Images

I was doing a diploma in folklore and history and as part of that, a genealogy project. I wrote about my great-grandfather who died in the Great War. That was about six or seven years ago. When I was doing my masters in historical and heritage studies, I wrote about the Devil’s Own, a nickname from the Connaught Rangers who were fearless in battle. I couldn’t believe the amount of Sligo men who volunteered and went to war. When I had to choose a topic for my thesis, my supervisor said to take it a little further and discover how many went from Sligo.

My thesis was based on the social profile of the people and their motivation for going. It saddens me to think we lost 605 men and they’re not remembered in the community. There are several commonwealth graves in Sligo cemetery and a few dotted around the county. In every other part of the British empire at the time, memorials were put up. We had a cenotaph erected in Sligo because we had a strong Protestant community

It’s the men’s stories that got to me. When you talk about the war, people say “they went for economic reasons, they were all dockers and had no money”. But the conclusion of my thesis was that the main reason many enlisted was due to peer pressure and the propaganda of the time. A lot of them weren’t literate. The posters were colourful and exciting. There were military bands and recruitment rallies all along the railway station coming into Sligo. They spoke to the people of the town and it was a joyous occasion. People were caught up in the hype. Several printer compositors from Sligo died in the Great War. Football teams went. County Sligo Golf Club went. Freemasons went.

Men went from Easkey, from Enniscrone, all these tiny townlands. Every community in Sligo was affected. By the time my great-grandfather died, he had eight children. Seven of his pals died in the war and three others came home.

As I was researching, I felt overwhelmed by this tragedy, by the lack of recognition for these men. It seemed that I was given a purpose. When the remembrance celebrations took place in 2014, I wrote a Facebook post saying I was going to remember them. Others got involved in trying to get a memorial in town. I wrote to TDs and the chief executive of the county council.

Finally, in February of this year we got a site. We’re turning the sod on Armistice Day. We’ve gathered the names of 605 men and five civilians, and at 11 minutes past 11 we will walk through the streets in Sligo in period dress remembering them.