The Times We Lived In: It’s a dog’s life 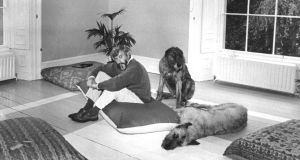 Author JP Donleavy at home with his two dogs in 1971. Photograph: Dermot Barry

It’s that “just moved in” sort of feeling. You have the house. You’ve got the dogs. But, dammit, you just haven’t had time to buy any furniture.

“Author JP Donleavy at home with his two dogs,” reads the somewhat bemused caption on today’s photograph. The home in question, Levington Park, sits in isolated splendour on the shores of Lough Owel in Co Westmeath. A proper 18th-century country house with 11 bathrooms and an indoor swimming pool, it was bought with the proceeds of Donleavy’s cult novel The Ginger Man.

From the time he first set foot on Irish soil – born in Brooklyn, he came to study at Trinity College, Dublin in 1946 – Donleavy was a mythmaker. First, he created the myth of Sebastian Dangerfield, The Ginger Man’s hard-drinking, womanising anti-hero. Then he set about creating the myth of himself.

Donleavy liked to say he purchased Levington Park for its gift of solitude. Mention him to anybody who has even a glancing acquaintance with his work and they’ll claim him as Ireland’s most famous recluse. And yet from the moment he moved in – perhaps, if our picture is anything to go by, even before he moved in – until his death at the age of 91, a stream of media visitors arrived at the house with the regularity of an ebbing and flowing tide.

The internet is awash with the results of these visits: well-written, intelligent interviews, for the most part. They all contain the same anecdotes, in a different order. How Brendan Behan threw the shoes over the ditch. How Johnny Depp’s movie of The Ginger Man is coming along nicely. None of them, sadly, contain wolfhounds.

Which turns this lovely, and typically quirky, picture of the author and his hounds into a bit of a treasure. The dogs loll about the largely unfurnished room, looking suitably mournful and mysterious. There are those who say they’re the same dogs who, three years later, would feature on the cover of Van Morrison’s album Veedon Fleece.

As so often with these photographs from the past, we don’t know their names. But it doesn’t matter. One way or another – like their master – they’re a class act.

You can buy this photograph and other Irish Times images from irishtimes.com/photosales

Stuck for something to do during coronavirus lockdown? Have a #CovideoParty tonight
9