April 2nd, 2018: Herbert Simms is credited with designing 17,000 dwellings in Dublin and helping transform the city in the 1930s. Video: Enda O'Dowd 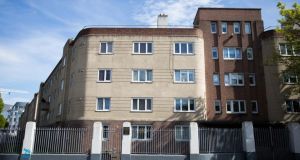 The council’s housing committee has voted to start the process of “delisting” Pearse House and Markievicz House so that the dilapidated flats can be demolished and replaced with “decent modern accommodation”.

Residents of the two complexes on Townsend Street in the south-east inner-city have long campaigned for the redevelopment of their blocks and recently protested outside the council’s officers over a rat infestation.

Sinn Féin councillor Chris Andrews, who proposed the delisting of the flats, said they were no longer fit for habitation and should be levelled and rebuilt.

“The drains are constantly blocked, the stairwells are disgusting, some of the flats don’t even have hot water. These flats are more than 80 years old, they are no longer fit for purpose.”

“The walls are literally crumbling here, the sewage comes back up over the top of the toilets. My view would be that we knock these buildings entirely and redevelop, instead of trying to put a bandage on what is a gaping wound.”

While the demolition of old rundown flats has the support of the council’s deputy chief executive Brendan Kenny, the council’s architects department is opposed to the destruction of blocks built by Simms.

Simms oversaw the construction of 17,000 flats and houses in Dublin in his tenure as housing architect from 1932 to 1948, including Pearse House and Markievicz House, built between 1934 and 1936.

More than 800 city flats are on the record of protected structures, almost all were designed by Simms. Earlier this year, Mr Kenny said the councillors should consider removing some flat blocks from the RPS so they could be demolished to make way for new apartment complexes.

While the Government was prepared to advance money for new construction projects there wasn’t “a hope in hell of getting Government funding to do refurbishment,” he said last May.

Following those comments the council’s architects department released a statement saying the council “has not planned the demolition of any of the blocks designed by Herbert Simms” apart from those already being redeveloped as part of the Teresa’s Gardens regeneration programme “nor planned de-listing of these blocks and there is no current suggestion of changing this position”.

It specifically mentioned Pearse House and Markievicz House which it said “form successful streetscapes and enclose good internal courtyards” and “should not be demolished”.

Mr Kenny said delisting buildings was a decision for city councillors. It would cause “major controversy” if Pearse House and Markievicz House were delisted, but he said “the opposition won’t come from the residents, it will come from elsewhere”.

However, Mr Kenny said it was important not the raise the expectation of the tenants that redevelopment was imminent he said as it would be several years before the blocks would be demolished.

The council’s planning department will prepare a report on the delisting proposal, which will be presented to local councillors and then the full council for decision.