When Dublin Airport got a space-age restaurant

The Times We Lived In: Published March 31st, 1953. Photograph by Dermot Barry 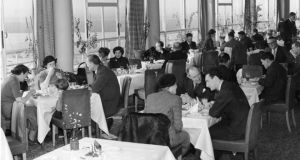 Even now it looks posh. For the 1950s, it was positively space age. Linen tablecloths and napkins; formal place settings; floral arrangements cool enough to make an Ikea stylist weep. And a well-heeled clientele, dressed to the nines and making their way through several unhurried courses.

You’d never guess – would you? – that today’s photo was taken in the restaurant at Dublin Airport in spring 1953.

It appeared with an article headlined “A Gastronome’s Guide to Dublin”, part of a supplement dedicated to An Tóstal, a newly established festival of Irish culture whose aim was to draw tourists to this country during the Easter off-season.

The writer, who obviously has an appetite for the subject, notes that several Dublin bars have created cocktails for the festival period – the Shelbourne came up with the “Tricolour”, the Gresham with “Majestic Mist” – and that the city’s leading restaurants have also come up with special dishes.

Among the latter are Jammet’s, the Red Bank, the Bailey – and the restaurant at Dublin Airport, which “offers a wide array of Tóstal dishes, ranging from Cream Tara, a thin chicken velouté, to a Mousseline Robert Emmet, a light chocolate soufflé mixture creamed with rum”.

There’s no sense that the airport restaurant is punching above its weight in this august dining company (although, having mentioned Dublin Airport, the article helpfully adds “Collinstown” in brackets, lest gastronomes should get lost in their attempts to locate it).

In 1953 the airport had been open for just over a decade, and flying was so expensive that few Irish people were able to afford a ticket. In fact, a much greater number of people sought out the airport in order to eat. The airport’s Collar of Gold restaurant, run by Johnny Oppermann, son of a Swiss chef who had settled in Dublin in 1912,was the place to be seen: many glittering balls and dinner dances were held there, and tables for New Year’s Eve had to be booked a year in advance.

Nowadays, of course, we can just grab an instant blueberry muffin and sippy-cup coffee as we dash, sweating, from one queue to the next. Progress: don’t you just love it?

You can buy this Irish Times image, among many others, from irishtimes.com/photosales

Is it not time we celebrate Ireland and Britain’s closely intertwined culture?
9