Have you been to ‘Queen Maeve’s Vulva’? Ireland’s oddest placenames

We can reclaim Ballypitmave, and thousands of other names, or let them fossilise 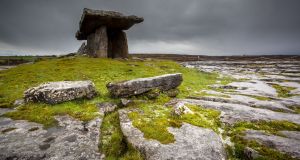 A koan is a paradoxical riddle without a solution. It’s also an apt definition of many of Ireland’s placenames. These encoded glimpses into our culture, psyche and past practices offer insights into the lives of our ancestors, knowledge of lost environments and a profound sense of just how long we have been beetling away on this island.

Whether they are intoned from weather forecasts, squawking at us from satnav, or plastered on road signs, placenames surround us, yet we rarely stop to consider them. Each is a little periscope of insight, a pellet of knowledge that can be unpacked to reveal surprising results.

What caused the abandonment of Faslowart (which in Irish is Fás Lúghoirt, the deserted herb garden), in Co Leitrim? Do the residents of Ballypitmave, in Co Antrim, wonder why they live in the townland of Queen Maeve’s Vulva (Baile Phite Méabha) or the folk of Skeheenaranky, in Co Tipperary, wonder what it is about their local thorn bush that made it so alluring for dancing? (Sceichín an Rince translates as the Little Thorn Bush for Dancing.)

The task of recording these words and deciphering their meanings falls to a tiny government office known as the placenames branch of the Department of Culture, Heritage and the Gaeltacht. I imagine something out of a Coen brothers movie: cloth-bound ledgers, creaky armchairs, cast-iron pencil sharpeners on oak desks.

The primary aim of this “branch” under the Official Languages Act is “to obtain the correct Irish forms of place names through scholarly research into the etymological development of the names from their original form, to the legal form in the English language that is in use today”. Think of them as an elite CSI unit for etymological conundrums.

As part of their work they find themselves mulling over what was so foul-smelling about Brantry, Co Tyrone, that gave rise to its name An Bréantar (from the word bréine, meaning stench or rottenness) or why Lackenagreany, in Co Waterford, was considered such an ideal sun trap (Leaca na Gréine meaning the Sunny Flagstones).

So far they have published thousands of placenames in Louth, Limerick, Waterford, Kilkenny, Tipperary, Monaghan and Offaly, with each publication revealing mesmerising glimpses into historical, geographical and anecdotal facets of our past.

Each place name is like a fossil recording some element of the existence of people long ago and offering clues about their beliefs and practices. More than 90 per cent of them have their origin in the Irish language, and a significant number date from before the seventh century, according to Dónall Mac Giolla Easpaig, the former chief placenames officer.

But over time the extent of their work proved too great for condensing into books, and for the past decade the placenames branch has teamed up with Fiontar & Scoil na Gaeilge at Dublin City University to create the Placenames Database of Ireland.

This website represents a bewildering wormhole of insights into the history, archaeology, landscape and fauna of our island. There are sound files for thousands of placenames, mapping tools for each one, scans of archival research notes from the past century and myriad educational resources for primary, secondary and third-level students or the curious. It’s a bewildering and beautiful resource – the collected wisdom of two millenniums of topographical knowledge for almost 70,000 townlands.

And yet despite managing to collate, analyse and digitise this throve of knowledge, the team at the database realised they were only scratching the surface. There is still so much placelore out there linked to names of fields, hills, hollows, rocks, cliffs, trails and summits that is at risk of being lost. And so in 2015 they founded a crowdsourcing project for minor placenames, Meitheal Logainm, and put out the call to communities across the nation to submit their local lore. This crowdsourcing platform for pooling, mapping, storing and sharing data about minor placenames has so far gathered tens of thousands of names.

Honourable examples of these community initiatives are the Meath Field Names Project, which gathered 24,700 field names, and the Kilkenny Field Name Recording Project, which has collated 7,000 field names in 190 townlands. In an accompanying publication, Meitheal na bPáirceanna, the co-ordinator of the Kilkenny project, Alan Counihan, writes that “the names of our townlands, our fields and our landmarks are the essential threads that hold that quilted fabric together. If we do not tend to its stitching, the entire weave will quickly unravel and the secrets of an oral heritage handed down across the generations will be lost for ever.”

Counihan and his team found that field names describing the presence of wells were most common, followed by those highlighting the existence of quarry stone, as well as spots for burning limestone to act as a soil improver and building material. There were also field names indicating fairy forts, historic events, topography, soil type, plant varieties, windiness and folklore. In some southeasterly parts of the country up to 35 per cent of place names were in various forms of corrupted Irish – despite the fact that the language hadn’t been spoken in the area in several generations.

Counihan noted that “field names in Irish are those deemed most worthy of preservation by both landowners and survey volunteers. It is as though they offer pathways to an older time, to the life and language of our forebears, to the memory of a landscape and way of life that is threatened by the drive to higher productivity and the bureaucratic efficiencies that would rather record a field as a numbered block of pasture or an animal as a grazing unit. Field names, whether in Irish or in English, will continue to come under threat, and the time to record them cannot be delayed.”

Certainly, these names are at risk, yet it can be hard to convey what their loss amounts to. We have developed these names as our own idiosyncratic way of seeing our surroundings over the course of millennia. PW Joyce described them, in 1870, in The Origin and History of Irish Names of Places as “this great name system, begun thousands of years ago by the first wave of population that reached our island [and] continued unceasingly from age to age, till it embraced the minutest features of our country in its intricate network”.

The topographical names for key locations were preserved in a separate strand of folklore titled An Dinnseanchas, which as a word is impossible to translate fully into English, other than as “the lore of notable places”. This translation fails to capture how the tales convey the influence that certain place names have on the humans and animals both living in and visiting the space. The nearest equivalent term might be the “tjurunga lines” of the Aboriginal people of Australia, often called songlines or dreaming tracks, that summon the land to life through specific songs that are sung along invisible trails in the landscape.

At its most potent the Dinnseanchas has a similar ability to manifest elements of the landscape into being, or at least alter our perception of the environment so that our minds read the land on a more profound and unfettered level. It’s a complex, illogical, intuitive lore that often appears to be absurd or fanciful, and, in fact, large tracts of it are simply medieval fabrications with barely a few strands of original text remaining, but if perused carefully the Dinnseanchas can help us see the land as a threshold to the past, to embodied wisdom and even to the souls of our ancestors.

As a population we now have a choice of whether to reclaim our old place names or allow them become desiccated, fossilised remnants of a richer past, like the haunted ghost words one encounters in North America: “Ohio” (an Iroquoian word for great river or large creek), “Quebec” (an Algonquin word meaning narrow passage or strait), or Saskatchewan (from the Cree word for swift-flowing river.)

We could end up like Australia where the infinitely nuanced native landscape has become a blank void, known, at best, as the Outback, or, more tragically, as the Gafa – the “Great Australian F**k All”.

A place such as Muckanaghederdauhaulia, in Co Galway, which derives from Muiceanach idir Dhá Sháile (pig-shaped hill between two seas) can become just another joke, a bumper sticker to sell to tourists, or we can start actively conserving our local heritage.

The first step is to ask the oldest and wisest people in our communities for the names of every minor topographical feature in the area and then to record them at Meitheal Logainm.

Lios Fear Beag na gCamán The Fairy Fort of the Small Man of the Hurleys. In Co Clare.

Cuas Rinn an Aonbhallaigh The Cove of the Point of the Solitary Wrasse. In Co Kerry.

Nead an Dá Fhiac The Nest of the Two Ravens. In Co Cavan.