Cabinet of Curiosities: what new wonders await at the Dead Zoo? 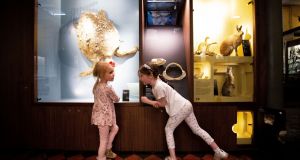 Cabinets of Curiosities have been in existence for hundreds of years. They are sometimes known as Wunderkammer. The Victorians, in particular, loved their Cabinets of Curiosities. Some cabinets were used for educational purposes, and others, notably those held privately, were simply esoteric collections of unusual objects. What they all had in common was that they resembled miniature museums.

Dublin’s Natural History Museum – you may also know it as the Dead Zoo – is arguably one large cabinet of curiosities in itself. You don’t go there for the quality of the taxidermy. You go to see a perfectly preserved Victorian museum, while mourning the continued closure of its upper floors. From this week, the museum now has what it is calling its own Wonder Cabinet.

The name the museum staff have given their newest exhibit is, in my opinion, over-stretching the concept of the Wonder Cabinet. If you turn up hoping to view some of the true curiosities the museum holds, such as dodo bones, you’ll be sorely disappointed. This is not a cabinet crammed with many unusual objects. It’s not even a cabinet. It’s a clever piece of architecture that does an excellent job of providing a space for the many educational activities the museum offers, but it does not resemble any Wunderkammer I’ve ever seen.

So what exactly is the Natural History Museum’s newest exhibit? “We wanted to give the space in the middle of the floor an identity,” explains Siobhán Pierce, the museum’s education and outreach officer for archaeology and natural history. The museum does a lot of work with schools, and wanted to create a focal space for this work. The cube-like structure now located on the ground floor is composed of two facing cabinets, linked by a wooden ceiling. A projector is concealed in the ceiling, and pieces of wood fold down to create a display table. “It’s a multi-use space” Pierce says.

The exhibits are organised around the theme of predator and prey, with the idea that there is also an element of the interactive. Some new pieces of taxidermy were commissioned for the new exhibit. They include a falcon in flight after a pigeon, baby rabbits and a fox cub. The fox cub is curled up, looking absurdly cute. He’s an English fox, salvaged from roadkill. There’s probably a Brexit joke in there somewhere. Anyway, it’s a good thing he’s behind Perspex, as are the baby rabbits, as they are obvious magnets for any small child longing to stroke something soft and furry.

“Is that real?” one small boy asks, staring at the fox cub.

“It was real, but it’s dead now,” is the reply. The child doesn’t look convinced.

One thing that can be touched is an antler from the Giant Irish Deer, more than 10,000 years old, and resembling a piece of calcified wood. That’s real, but the other things that can be touched are replicas: a hyena’s skull, a seal skull, a giant fossil shark tooth and a shark jaw. The replica shark teeth are convincingly sharp. “We’re filing them down,” Pierce confesses.

Some of the specimens are taken from the museum’s own archive. There’s a slightly worn-looking hare from 1892 and a stoat dating from about 1911. There’s a large Loggerhead turtle with barnacles on its back, that was found washed up on a Connemara beach some year ago. There’s also a spotted hyena fossil jawbone, which was found in a cave in the south west of Ireland.

The museum staff are hoping that these objects will provide talking points for the many children who visit the museum, both from schools and with their families.

Hamilton the movie soars above its stage-bound origins
9

‘This is such a terrible mess. But I feel the power of what we do more vividly than ever’
10