When will people go back to the Moon?

Former UCD student Patrick Norris ended up working for NASA in Houston for three years in the late 1960s at the peak of the Apollo programme that landed the first men on the moon in July 2019. Video: Bryan O'Brien / NASA/ Reuters 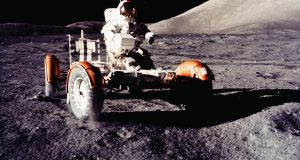 Eugene Cernan on the Moon – holder of the “Last Man on the Moon” title since 1972. Photograph: Corbis via Getty Images

The difficulty of landing men on the Moon is highlighted by the Soviet Union trying and failing to do so in the 1960s. Soviet rocket technology was first-class but they failed to develop a heavy lift rocket on the scale of America’s Saturn V – the Soviet N1 rocket failed all four test flights before being cancelled.

The USA made the massive financial commitment that was needed, and Neil Armstrong and another 11 Americans walked on the Moon between 1969 and 1972.

Of the hundred or so space launches each year (astronauts to the International Space Station, satellites for satnav, weather forecasting, science, etc.) none requires a rocket with even a quarter the power of a Saturn V.

So you have to justify the cost of developing a super-rocket solely on the basis of a Moon trip, making it extremely expensive.

In February 2018 a US company, SpaceX, launched into space the Falcon Heavy rocket that has more than double the power of its nearest rival, but is still only half the power of Apollo’s Saturn V. And SpaceX is now developing an even more powerful rocket called the Super Heavy/Starship that will exceed the Saturn V’s performance.

Owner Elon Musk’s vision of travelling to Mars is his justification for spending the perhaps $5 billion needed for the development of the super-rocket.

His skill at developing rockets for a fraction of the cost of Nasa has already been demonstrated in the form of his mainstream and best-selling Falcon 9 rocket, whose low price has forced all rocket suppliers to reduce their prices significantly, and by the Falcon Heavy which was developed without government funding.

However, the sobering fact is that SpaceX has a key-person dependency risk in the form of its owner, Musk, whose death or incapacity would jeopardise its Moon and Mars plans. And since he has admitted on TV to work 120 hours a week and to take Ambien to help sleep, there must be a risk.

Another US company owned by a billionaire, Blue Origin, is aiming to establish human outposts on the Moon and is developing rockets that may eventually be powerful enough for that job. Blue Origin’s owner, Jeff Bezos, is the world’s richest man (his day job is running Amazon) and thus has enough money to be able to fund the rocket development at his own discretion.

Bezos’ suborbital rocket has been demonstrated and his first rocket capable of achieving orbit, called New Glenn, is far enough along in development to be credible, with a first orbital mission scheduled for 2020. New Glenn will be almost as powerful as the Falcon Heavy, and about 40 per cent of the power you would need for a manned lunar landing.

Like SpaceX, Blue Origin has a key-person dependency risk in the form of Bezos himself. Would a successor have the vision of industrialising the Moon and be ready to invest $1 billion a year to achieve it?

Nasa did it in the 1960s so it would be foolish to ignore its plans, especially as it has spent $23 billion in the decade up to 2018 on developing a super-rocket, the Orion spacecraft it would carry to the Moon and the ground facilities to support them. The Space Launch System super rocket continues to be funded at around $2 billion a year, and is due for its first launch in 2020.

There are to be three versions, the 2020 version being roughly as powerful as SpaceX’s existing Falcon Heavy. US vice president Mike Pence has demanded that Nasa get humans (including at least one woman) back to the Moon by 2024 and Nasa is in the middle of revising its thinking to make that happen.

Nasa’s costs are sky high, so there are serious doubts about the willingness of Congress to approve the $8-10 billion per year for the next five years that Nasa claims will be needed to meet that 2024 schedule – it was already seriously questioning the $4 billion per year that Nasa has been spending on this for the past decade. Especially as there are private sector alternatives becoming available at a fraction of the cost.

A program in which Nasa’s Space Launch System is phased out and replaced by SpaceX and/or Blue Origin rockets in the early 2020s would seem like a good bet, but requires political courage – effectively admitting that much of the $23 billion spent in the past 10 years has been wasted.

Europe, Canada and Japan have no plans to develop rockets in the Saturn V class, and will probably collaborate with the USA in its Moon program. Russia has been trying without success to develop new rockets for 15 years, so statements about building a super-rocket lack credibility for the foreseeable future.

In fact, there is little sign that Russia has learned the lesson of the 1960s that efficient management from top to bottom is key to success when considering such a complex mission as landing humans on the Moon.

China is a different matter, as it has said that it is considering sending humans to the Moon. It has begun by targeting the Moon with robotic probes in innovative ways, such as current Chang’e 4 rover and its Yutu-2 (jade rabbit) rover on the hidden far-side of the Moon and the 2019/2020 Chang’e 5 probe that will return two kg of Moon rock to the Earth for analysis.

In parallel with that, China has revealed long-term plans that include a heavy-lift rocket for which the prototype of the engine is nearly ready. 2030 is the stated date for it to be operational although the decision to build it won’t be made for another four to five years.

India’s recently announced plans to launch an astronaut by 2022 may encourage China to continue with its 2030 plan in order to convincingly maintain its space leadership in Asia.

Thus China looks like sending men to the Moon a few years after the USA. But if there are any delays in the US plans, then China will be positioned for a major publicity coup, with Gene Cernan’s “last man on the Moon” title passing to a Chinese astronaut.

Former Nasa contractor Pat Norris is the author of Returning People to the Moon After Apollo, www.pat-norris.com

What’s so funny about philosophers?
Real news has value SUBSCRIBE