The difference between the average unionist and average nationalist? Not much 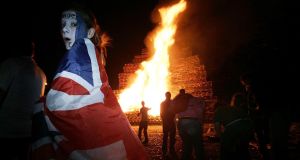 It speaks to the continuing grimness of this island’s history that so many will still baulk at the suggestion that ‘very few significant distinctions’ exist between your average unionist and your average nationalist. Photograph: Christopher Furlong/Getty Images

Oh great. It’s the month when one bit of Ireland congratulates itself on not understanding another bit of Ireland. If you are reading this outside the occupied six counties (yeah, whatever), you will – understandably enough – be puzzled by what passes for “culture” within that corral. Mad Prods incinerating enormous towers of timber within sparking distance of family homes. Large men with red necks stomping angrily down everyday streets that only they call “the queen’s highway” (just as only republicans refer to the British Army as “crown forces”). “It’s about the battle not the bottle,” an ongoing campaign from the Orange Order argues. Good luck with that.

There is still, in the rest of the island, a common perception that this is “how Protestants behave”. That is an unfair generalisation. It’s not even the case that this is “how unionists behave”. Large sections of Northern Ireland are evacuated for the Twelfth weekend. This is to be expected in nationalist areas, but it is also true of many areas where Protestants thrive. Tumbleweed bounces down city streets whose traders and inhabitants are away breathing fresher air in Donegal or Tuscany. Belfast in mid-July can be like France in early August. Those few citizens you do meet are less likely to be force-feeding geese, but the sense remains that life is temporarily elsewhere. You notice this in the integrated, middle-class suburbs of south Belfast. Don’t bother proposing a dinner party on the Malone Road during marching season. You notice it elsewhere too.

There has long been division between those unionists who abhor the annual sectarian paroxysm and those who regard recreational pyromania as an expression of living culture. My maternal grandfather, a respected figure in his rural unionist community, always said he wouldn’t walk to the bottom of the lane to watch an Orange parade pass. “He would do anything to avoid causing his Catholic neighbours offence,” my mother explained.

None of which is meant to excuse the significant numbers of berks flinging effigies on to flaming pallets. The bigotry is explicit, intimidating and unyielding. Our mild, uncontroversial argument here is merely that you will encounter the same mix of reason and unreason among the Protestants of Ulster as you will among any other community on the island. Unfortunately, the extremes act out in less lovely fashion there.

The dubious generalisations that such communities make about one another are repeated throughout the world. Everyone, everywhere does this to his or her neighbour. If foreigners make an effort they can disentangle the genuine political and social distinctions that cause such trauma within Northern Ireland. They tend to have greater difficulty understanding the differences in character that the Irish believe divide them. Speaking to Freya McClements in The Irish Times last week, James Nesbitt noted that: “I think for a lot of Protestants, when they go away it’s quite a shock that they are regarded as Irish.”

There is still a class of northerner who thinks their bearing immediately identifies them as Catholic or Protestant. To most outsiders, the notion is as absurd as suggesting you can tell a person’s blood group by the way they hold their fork. To most outsiders, we’re all just Northern Irish people. To still more outsiders, we’re all just Irish people. More than a few Americans have difficulty distinguishing an Irish person from a Scot, a Welsh person or even (God help us!) someone from the Other Place.

We return to Sigmund Freud’s useful “narcissism of small differences”. The argument is that communities living in close proximity will engage in furious feuds based on the most modest of cultural or social distinctions. The further away you get from those communities the more difficult those disputes are to understand. There is, conversely, no sample too small to harbour just such pointless disputes. Southerners see themselves as distinct from northerners (sometimes because northerners use offensive terms such as “southerners”). Dubliners see themselves as distinct from those outside the Pale. Northside and southside Dubs still manufacture mutual hostilities. Within those sectors it can matter if you live between the canals or not. And so on.

Much of this is harmless. Online culture has broken consumers up into endless competing tribes. Fans of DC superheroes pretend to hate fans of Marvel superheroes. Are you, as a Twilight fan, on Team Jacob or Team Edward? (Team Edward obviously, but you know . . .)

Elsewhere, no jokes are appropriate. Christopher Hitchens once wrote: “In numerous cases of apparently ethno-nationalist conflict, the deepest hatreds are manifested between people who – to most outward appearances – exhibit very few significant distinctions.”

It speaks to the continuing grimness of this island’s history that so many will still baulk at the suggestion that “very few significant distinctions” exist between your average unionist and your average nationalist.

That truth is hardest to grasp in the weeks after midsummer.