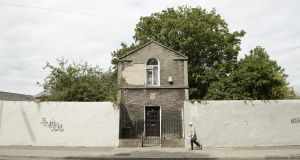 Gate lodge to the Jewish cemetery on Fairview Strand: Founded in 1718, it is one of the earliest surviving Jewish burial grounds in Ireland or Britain. Photograph: Enda O’Dowd

Ireland’s oldest Jewish cemetery is to be refurbished and reopened to the public more than 40 years since its closure, under new plans from Dublin City Council.

The council took ownership of the cemetery on Fairview Strand in Ballybough two years ago from the Dublin Jewish Board of Guardians, who could no longer afford its upkeep.

Founded in 1718, it is one of the earliest surviving Jewish burial grounds in Ireland or Britain and merits consideration for National Monument status, according to a conservation and management plan commissioned by the council.

However, the historic fabric and character of the cemetery is under threat due to the overgrown condition of the grounds, the dilapidated state of the mortuary house and encroachment from neighbouring sites.

“Of particular concern, given international experience, is the risk of anti-Semitic vandalism leading to the defilement of this sacred space” if its poor condition is not addressed, the plan states.

The cemetery is bounded by a high wall and the only external indication of its presence is a plaque on the front of the mortuary house which states it was built in 5618, the Hebrew calendar date which translates to 1857 in the Gregorian calendar.

The mortuary house was built 139 years after the cemetery first opened, as a defence against grave robbery and the theft of headstones, and until recently was the residence of the cemetery caretaker. It is no longer habitable.

The cemetery has almost 150 headstones with inscriptions in both Hebrew and English, and holds about 200 graves. It was in use from 1718 until the end of the 19th century, when the Jewish community moved to the south side of the city and established a new cemetery near Dolphin’s Barn.

Just a handful of burials took place in Fairview in the early years of the 20th century, with the last interment in 1958. The cemetery officially closed in 1978.

The oldest surviving headstone commemorates Jacob Wills, who was born in France in 1701 and died in Dublin in 1777. The largest tomb belongs to Lewis Wormser Harris, a former alderman, who was been elected lord mayor of Dublin. He would have been the city’s first Jewish mayor but died the day before he was due to take office in 1908.

The conservation report notes the grounds have been “colonised” by invasive plants, including Japanese knotweed, and mature trees are displacing memorials, damaging both their stonework and metalwork.

In recent years, the mortuary house has been subject to numerous break-ins and squatting. While there are “no obvious examples” of anti-Semitic vandalism, it said, this was a risk, and the house and cemetery would “remain a focus for anti-social behaviour” unless a strategy was put in place to ensure the “preservation of the built heritage and the sanctity of the burials, while also making the site more secure and accessible to the public”.

While there have been suggestions the house should be used as a museum or interpretive centre, the report recommends it be restored for use as a caretaker’s house for surveillance of the cemetery.

The council has already carried out historic research, cleared weeds and secured the house, but aims to undertake further conservation and restoration work before the cemetery will opened to the public. The conservation plan will be presented to councillors for approval after the summer recess.