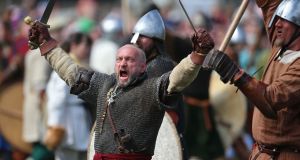 The data shows the importance of migration as, without the Vikings, the population decline could have been much worse, according to the researchers. Photograph: Niall Carson/PA Wire

Ireland’s population was in “serious decline” before the arrival of the Vikings, new research suggests.

It had been assumed that the Irish population saw a steady rise across the centuries until the Famine in the 1840s, but new estimates show there was a decline in population numbers for almost 200 years before the Vikings settled in Ireland in the 10th century.

Academics from Queen’s University Belfast (QUB) used rigorous archaeological data science algorithms to analyse a database of archaeological sites discovered during Ireland’s Celtic Tiger years, when there was a boom in motorway building and other developments.

The researchers examined the radiocarbon readings that were included on excavation reports from these archaeological sites, and translated those readings into the level of activity during the early medieval Ireland period.

Dr Rowan McLaughlin, research fellow from the School of Natural and Built Environment at QUB, said based on these readings, Ireland’s population appears to have gone into an unexplained decline about 700AD.

“Millions of people lived in Ireland during prehistory and the earliest Christian times,” he said. “Around the year 700, this population in Ireland mysteriously entered a decline, perhaps because of war, famine, plague or political unrest. However, there was no single cause or one-off event, as the decline was a gradual process.”

The researchers said the data showed the importance of migration as, without the Vikings, the population decline could have been much worse.

“The Vikings settled in Ireland in the 10th century, during the phase of decline and despite being few in number, they were more successful than the ‘natives’ in expanding their population,” Dr McLaughlin said.

“Today, genetic evidence suggests many Irish people have some Viking blood. This large database has opened up a completely new perspective on the past that we simply could not obtain any other way,” he added.

Emma Hannah, lead author of the paper, said the method used in the study would allow scientists to have a better understanding of that time.

“Often in archaeology we are focused on interpreting the evidence from a single site, but analysing quantities of data in this way allows us to think about the long term,” Ms Hannah said. “Now we know these broad trends, we can better understand the details of everyday life.

“It was quite surprising because the popular narrative is that there was increase in intensity of farming activity during the time but when we looked at the readings it showed a slowdown in agriculture and farming activity,” she added.

Ms Hannah intends to continue this research during her PhD by looking at a subset of the data, and testing how craftwork in Ireland developed and evolved over the same period.

“I’ll look at craftwork activity, like iron working, fine metal working and textile production,” Ms Hannah said. “There’s this perception that somewhere around 900, when the Viking towns were established and were really successful, that craftworking at rural, everyday sites kind of migrated towards these urban towns.

“I’m trying to determine how much that is the case and trying to see how craft production as a whole relates to Viking urbanism,” she added.

The research from Queen’s School of Natural and Built Environment has been published in the Journal of Archaeological Science.