Changes proposed will not fix traffic problems in the area, local councillor says 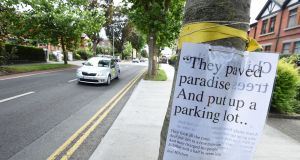 Local residents tied yellow ribbons around the trees on St Mobhi Road to protest against plans for their removal. Photograph: Dave Meehan

Car commuters on Dublin’s northside face increased traffic jams during the evening rush hour under proposals to save mature trees in Glasnevin as part of the BusConnects project.

The National Transport Authority (NTA) had proposed felling 140 trees to facilitate two-way segregated bus lanes on St Mobhi Road as part of the core bus corridor from Ballymun to the city centre.

If the tree removal and road widening did not go ahead, motorists would have to be banned from using the 1km road to travel north out of the city.

Local residents tied yellow ribbons around the trees, most of which are more than 100 years old, to protest against plans for their removal. However, residents also objected to the proposal to make St Mobhi Road one-way, except for buses, with many arguing for a “do-nothing” option until the MetroLink rail line, which will run underground along the same route, is operational.

The NTA is now considering a compromise proposal which would see all but 40 trees retained, and “time-limited” restrictions on motorists travelling north to access Griffith Avenue. However, this car ban is likely to kick in from late afternoon to evening for the busiest period of commuters leaving the city.

During the restricted hours, commuters heading north from Phibsborough would divert towards the National Botanic Gardens and up Glasnevin Hill before turning right on to Ballymun Road to access Griffith Avenue, or continue straight to Ballymun.

Under this proposal, access to homes, schools and side roads from St Mobhi Road would be maintained but cars would be blocked from continuing north on to Griffith Avenue.

Fianna Fáil councillor Mary Fitzpatrick said the changes proposed would not fix the traffic problems in this area. “This will just displace the gridlock and the congestion to other roads, it’s just moving the traffic on, rather than offering commuters a real alternative so that they will leave their cars at home.”

The plans for the bus corridor were premature ahead of the development of the metro, Ms Fitzpatrick said.

“On this route there is a parallel proposal for the high-speed MetroLink. Why would anyone use the bus when there is a metro available to them? It’s crazy and counterproductive.”

Labour councillor Marie Sherlock said she was “sympathetic” to this view but noted it would be many years before the metro was in place.

“We do have a public transport issue now, and the timed option is better than the drastic options of cutting down all the trees or putting in a 24-hour ban.”

However, she said she remained concerned about the diversion of traffic along Botanic Avenue and Ballymun Road, where there were “particularly narrow pinch points”.

The NTA said it was still considering route options and was working with local community groups on St Mobhi Road. The preferred routes would be available for public consultation later this year, it said.