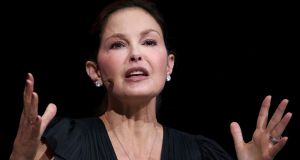 A federal judge dismissed part of Ashley Judd’s multipronged lawsuit against Harvey Weinstein on Wednesday, ruling that her allegations of sexual harassment do not fall within the scope of a California statute. The order by Judge Philip S Gutierrez of the US district court in Los Angeles does not end Judd’s case, which is built around other claims, including defamation and unfair business practices. In a suit filed in May, she claimed that her career withered because Weinstein spread lies about her in Hollywood after she rejected his sexual requests.

“Nothing about today’s ruling changes that Ms Judd’s case is moving forward on multiple claims,” Theodore J Boutrous jnr, the lead lawyer representing Judd, said in a statement. Gutierrez’s 13-page order on Wednesday made it clear that he was making no judgment on whether Judd had been sexually harassed by Weinstein “in the colloquial sense of the term”.

Rather, the ruling was limited to whether a recent change in California sexual harassment law applied to Judd, who has said in court filings that Weinstein, appearing in a bathrobe during a business meeting at his hotel in the 1990s, asked her to submit to a massage and watch him shower. Judd previously recounted the episode in an interview with the New York Times.

Weinstein has denied engaging in nonconsensual sexual activity. “We have said from the beginning that this claim was unjustified, and we are pleased that the court saw it as we did,” Phyllis Kupferstein, a lawyer for Weinstein, said in a statement. “We believe that we will ultimately prevail on her remaining claims.”

In September, Gutierrez ruled that Judd could not claim sexual harassment because she did not have a specific business relationship with Weinstein at the time – a requirement of the statute. But the court allowed Judd to amend the sexual harassment part of her complaint and resubmit it. Her lawyers did so, citing end-of-year revisions to California sexual harassment laws and arguing that the changes should be applied retroactively.

It is rare for people to recover damages for smear campaigns – for instance, quietly labelling actresses as “difficult” when they do not acquiesce to powerful men – because of how complicated it can be to prove the action took place, much less harmed a career. But Judd has an A-list director on her side: Peter Jackson, who came forward early last year to say he removed Judd from a Lord of the Rings casting list “as a direct result” of what he now thought was “false information” provided by Weinstein.

In her original suit for defamation, Judd said that, until Jackson came forward, she did not know that “something unseen was holding her back from obtaining the work she wanted, and had been doing so for decades”. Separately, Weinstein faces a criminal trial in New York City this year. He faces charges that he raped one woman and forced another to allow him to perform oral sex on her. – New York Times