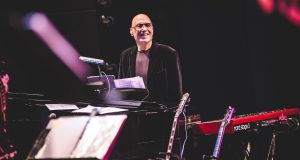 Mike Garson: “I love the music, I hate the music business!”

Once struggling jazz musicians can rarely forget the days when they were handed a few dollar notes for a gig or a few hours of session work. You never know what might come from playing those poorly paid gigs, however, so you keep doing them in the hope that one fine day someone will hear you, take you out of relative penury and bring you – if not fame or fortune – to a point further on up the road to greater success.

That’s what happened to New York-born Mike Garson. In the early 1970s, having graduated with a music degree from Brooklyn College, he did some session work for the recording of I’m the One, the debut album by avant-garde/jazz/free-form poet/electronic artist Annette Peacock. The most famous of her niche fans (who also included Patti Smith and Laurie Anderson) was David Bowie, ever the musician to perk up at the sound of something willfully different. Bowie was so taken with I’m the One’s proto mesh of electronic music, free-form jazz, and spoken word that he asked her to go on tour with him. Peacock declined but suggested that Bowie check out her young tyke session pianist.

Mike Garson had never heard of Bowie prior to being auditioned for a pivotal role in the Spiders from Mars, who were about to embark on the inaugural Ziggy Stardust tour of the US. Garson wasn’t clued in at all to pop culture. “I’m still not fully aware of all the facets of pop culture,” he admits from his base in Los Angeles, “and it’s difficult even trying to catch up with so many new music acts coming out. You have to remember that in the late ’60s and early ’70s, I lived in a world mainly of my own music, and also in the world of jazz and classical. Getting to grips with pop culture has been a long learning curve for me.”

Initially, working within a rock band format didn’t stretch him. Garson’s influences up to this time veered from Chopin and Mozart to Art Tatum and Oscar Peterson. “When I first started with Bowie I found the music quite simple, and I was a little bit condescending towards it, but as I’ve grown older I have come to adore the simplicity of it, and finding ways to work within its structures. Jazz has its own difficulties, of course, and there’s a tendency to stick to the ‘once a jazz musician, always a jazz musician’ thing. Over the years, I have to say that I’ve been humbled out of that.”

This is somewhat of an understatement, as Garson quickly became the musician that Bowie turned to again and again for more than 30 years. There is a reason for this, Garson claims, and it came down to his ability to change styles from jazz to improv, from odd to out there. He admits this is why he and Bowie “connected very deeply”, and why he collaborated, on and off, with him on albums from Aladdin Sane (1973) to Reality (2003), on tour, and on his very last public appearance in America in November 2006 (an Aids benefit concert in New York city).

Those Ziggy/Aladdin Sane albums eased the way into what was inarguably Bowie’s most impressive creative stretch, but they were also times when drugs and alcohol were as freely available as between-meal snacks. Garson was having none of that, however, avoiding the lifestyle that too often comes with being a successful artist. Unusually, it has made the 73-year-old musician a most trustworthy witness.

“Maybe when I’m 75 I’ll try something more dangerous than champagne! It was a simple choice, really, and for better or worse, the drug/alcohol lifestyle was not part of my DNA.” It doesn’t bother him whether he’s viewed as an anomaly, he says. “Sometimes I like hanging out with people who have a few beers on them, and sometimes I don’t.”

So he remembers everything, yes? The bun fights, the laughs, the highs, the lows, and everything from Ziggy to Reality?

“I can certainly remember many things,” he affirms, “but the brain is a funny thing. There are people who can recall everything and people who remember nothing, and others that have varying degrees of memory loss. I know many other people would have much sharper memories and details of those times than I would have, but the sense of it, the feel of that time, and the experiences, yes, I can do that. The data, the information? That can drift.”

What hasn’t wandered over time is Garson’s specific input to Bowie’s music. He is (perhaps unjustly) best known for his innovative one-take piano work on the Aladdin Sane album, notably three tracks: Time, the title song, and Lady Grinning Soul. Songwriting and copyright rules have changed for collaborative musicians since the early 1970s, with co-writes being recognised (and recompensed) for what they are. Back then, Garson was paid one-off session rates for what are singular, identifying additions to songs that would sound very different without them. Does he ever feel sharp pangs of regret at the lack of contractual royalty payments for his input to those songs?

“It wasn’t how it worked,” answers Garson impassively. He agrees that his input forms “more than just piano parts”, yet he isn’t infuriated because his work with Bowie from the outset, and through the years, has created a lengthy career in music.

“Touring with this Bowie show, playing with bands such as Smashing Pumpkins, Nine Inch Nails, and the rest – I have received so much work and requests from people to perform with them based on the fact that I played on many Bowie albums, so I can’t be that resentful because they helped me.”

In financial terms, he adds, it would have been good to have had more money to survive on, but, he repeats, that wasn’t how the music industry operated back then.

“There was a time when piano players would figure out the chords to a good tune, and just get thrown $50, while the publisher would make so much more money. That’s disgusting.

“What can I say? I love the music, I hate the music business!”

A BOWIE CELEBRATION – HOW LONG WILL IT LAST?

“People have asked that, and I’m not really sure of the answer. It could be two years, it could be 10. I guess it’s up to the fans. At this point, they come out and sing the words to every song with total enthusiasm, so if or when that desire and joy stops then you move on. But we’ll see.”