Cormac Breatnach: Blowing the whistle on a family trauma

In 1976, his brother Osgur Breatnach was wrongly arrested for the Sallins train robbery, and this album deals with the long-term pain. ‘It has released a huge burden for me’ 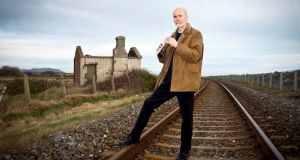 Cormac Breatnach: “I felt cornered by the whole public display of what was happening, and I became quite taciturn, turned inwardly and expressed myself mainly through my music”

The events of the past have a way of embedding themselves in our DNA. Sometimes that laying down of memories serves us well, but traumatic experiences can colour past, present and future with a terrifying and insistent hue. Cormac Breatnach is a whistle and flute player, and a man intent on harnessing music and other creative processes to break that cycle of post-traumatic stress.

In 1976, Cormac’s brother Osgur Breatnach and two others (Nicky Kelly and Brian McNally) were arrested for the infamous Sallins train robbery. During their interrogation, they signed confessions which they claimed were made under duress, following beatings by gardaí. Following the longest trial in Irish history in the Special Criminal Court, Osgur and Brian spent 17 months in jail before being acquitted on appeal. (Nicky Kelly fled, but was later arrested and jailed). Shortly after Osgur and Brian’s release, the Provisional IRA claimed responsibility for the robbery.

From the time of his arrest to his release, Osgur’s family found themselves in a vortex of legal and public debate, media scrutiny and active advocacy campaigning for his release. Cormac Breatnach was 13 at the time, and this miscarriage of justice had a defining impact on him, as it did on his entire family, in different ways.

Now, some four decades later, he has undertaken a project to try to address some of the trauma that the entire experience left lodged deep within. That project has evolved into an album, The Whistleblower, and an accompanying documentary, as well as a series of six short videos to accompany each of the six tunes he has written in response to what happened.

“It’s been a difficult process for me, and one with which I’m in continued conflict,” Breatnach admits. “There are times when I wake up and I ask myself, ‘did this really happen?’ Can’t I just leave it aside and get on with my life? But on the other hand, it’s been very rewarding and very self-affirming to see the support and interest out there, both on a personal and political basis, for this project.”

Breatnach is a musician who by his own admission is much more comfortable getting on stage, talking about tunes and playing music. But he’s motivated to step outside of his own comfort zone in order to address his own deeply-lodged trauma, and is hopeful that by doing so, it might help others to do so too.

“I strongly believe that we all have a story to tell,” he says, “and if it encourages people to think, ‘maybe I should talk about something,’ then that would be great.”

Osgur Breatnach received financial compensation from the State for his wrongful incarceration, but no inquiry was ever undertaken, and no apology ever given. Cormac’s album title, The Whistleblower references what he views as these failures on the part of the State, and it comes at a time when we’ve seen, most recently through the Maurice McCabe case, but also through the McBrearty and Shortall cases, how difficult it is to challenge the actions of our guardians of the peace.

“I certainly believe that Ireland is a different place to what it was in the 1970s, in that sections of the media and people in general are much more courageous about speaking out,” Cormac notes, reflecting on the intervening period of over 40 years since Osgur’s arrest and imprisonment. “However, people ask me could this case be replicated now? And while there have been a lot of legal changes, I think the mindset is still pervasive. Prejudices are still there that have to be dealt with. Unless we deal with it as a national issue, we won’t be able to prevent another generation taking this up again. I feel strongly that a truth commission is needed, because it’s when you say sorry, then the healing can start.

The repercussions of a lack of an enquiry have been enormous, in terms of Breatnach’s own family.

“I have huge admiration for whisteblowers, and one of the images I had while working on my project was of this unwritten letter or phone call that I never got from one of those gardaí who had information, but perhaps was too afraid to talk, saying ‘I’m terribly sorry, I don’t sleep well, I can’t speak out.’ I firmly believe we need a whistleblower to deal with this case.”

Breatnach embarked on his Whistleblower tour this month, following a four-year creative process. With accompaniment from accordion player Martin Tourish and fiddle player Daire Bracken, he’s produced an intriguing and coherent suite of music that unpicks the many aspects of the impact of his brother’s ordeal on the Breatnach family. His willingness to name that pain is striking, and the second track on the album, Lost Whistle, epitomises this.

“During my teenage years I felt cornered by the whole public display of what was happening”, he recalls, “and I became quite taciturn, turned inwardly and expressed myself mainly through my music. It was my way of saying ‘I can’t talk, but I will sing through the music’. My father, Deasún, was a journalist and of course he was at work a lot, so my way of connecting with him was to go to Mass with him on a Sunday and play music. I loved that. That was my bonding time with him.”

My parents both dealt with it in their own ways, but they formed the Dún Laoghaire branch of Amnesty which is now quite strong

A later pair of tunes, Amhrán na Mná and Faoi Bhláth, speak to the impact of the entire episode on the women in the Breatnach family; in particular, they recognise his mother’s resilience in the face of enormous pain.

“The first tune is more of a lament or contemplative in mood,” Breatnach explains, “and the second one much more defiant. For my mother, who tried to keep the whole family together, it was a horror. My parents both dealt with it in their own ways, but they formed the Dún Laoghaire branch of Amnesty which is now quite strong. I suppose what I’ve seen in our family was that it’s the only way we know: to empower yourself and fight back.”

The final tune on the album is called The Aftermath. The making of this album has had quite an impact on Cormac, both personally and creatively.

“It has released a huge burden for me,” he acknowledges. “Everyone in the family is affected differently, and I accept that, but this is the only way that I can deal with it, certainly at the moment.”

The ultimate resolution of this longstanding trauma can’t be achieved solely through a creative process, Breatnach admits. A full inquiry is needed, he believes, and this is unlikely to happen without the intervention of a whistleblower.

“Perhaps [this project] is reflective of a realisation that there may not be an inquiry or a whistleblower, and what a lost opportunity that would be for lack of healing,” he offers. “Because I can’t heal, and Osgur can’t heal until it’s acknowledged. It’s a kind of a no-brainer, really.”

Correction: an earlier version of this article incorrectly stated the length of time Osgur Breatnach spent in jail.

Bernadette Kiely evokes an isolation that has become routine
7