Mary Lee: The Irishwoman who became a leading light in Australia’s suffragist movement 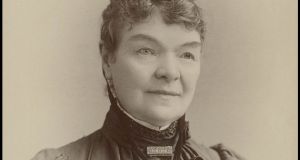 “A list should be taken of all openly disloyal and traitorous individuals. What is so truly revolting is the venomous spite and hatred ventilated through the public press by renegade English, or by Irish of the wrong sort - the ‘Mary Lee’ type”. South Australian Advertiser, January 13th, 1900.

The above quote refers to one Mary Lee, born Mary Walsh in Co Monaghan, who went to Australia at the age of 58 after being widowed while living in England. While in Britain, she and her Armagh husband, George Lee, had taught the three Rs: reading, writing and arithmetic, to poor children. After her husband’s death, Mary and her daughter Evelyn sailed on the Orient, heading off to nurse her ailing son, who died soon after their arrival in Australia. They never did return to this side of the world, either because they didn’t have the money or perhaps because Mary wanted to live away from the site of her bereavement. Evelyn settled into her job, being a flume for telegraphs, words travelling by sound on wire, words about all sorts of things: ships arriving, gold being found, children being born, miners revolting. Mary threw herself into socio-political life in her new place, becoming a leading light in the suffragist movement, and more.

I first came across her name when I stumbled on a pamphlet in a library while researching the 4,440-plus Famine orphan girls shipped to Australia between 1848 and 1850. Now there’s a word, “shipped”. It’s fraught with contentious weight, you’re not allowed to say “transported” because that suggests they had done something wrong. Equally, it’s a tad disingenuous to say “sailed”, as if they had all woken up in their various workhouses and thought, “gosh I’d like to go to Australia”. The word for their journey lies somewhere else, injured by the manner of their going. (I wonder did Mary ever meet any of them, or come near the periphery of their hurt?).

This is a book full of historical nuggets, casual references to all sorts of fascinating facts, to chimney children covered in soot and Mary’s own son working as a clerk at the age of 13. This in the English part of her life, because there are three, Irish, English and Australian. Born in 1821, her obituary written 10,000 miles away and 88 years later, states that she was born in Kilnock Estate. The author of this book has, like myself, spent time trying to pinpoint where exactly this might be. I’m erring towards the Monaghan/Tyrone border, but it is also possible that the name got entangled with another, as happened frequently on that long journey from here to there.

If we agree that there are three parts to her life, it’s hard to decide which is the most important. Certainly the part that makes her remembered is the last, which is a fine compliment to give the woman. When many others might have folded into their grief, she grabbed injustice by the lapels and shook it vigorously.

In today’s terms she lived, as some activists do, a life of unpaid public service. She spearheaded many campaigns, most notably the right for women to vote and be elected to parliament, but also ones to improve wages and working conditions. She was well into her 80s when she fought to abolish the death penalty, publicly opposed Australia’s involvement in war in Africa and supported the abolition of bans on public bathing for minors, all contentious issues that left her open to fierce criticism. About the latter, she showed some admirable wit and common sense.

“I wish Mrs Grundy would retire into comfortable seclusion . . . and leave us alone. Those youngsters - Heaven keep them - are enjoying their mixed ‘splash’ without a notion of harm. Why should they not? Some of them are from homes with floor too near the ceiling to be comfortable in weather like this . . . But the bathers! I don’t believe that Eve ever had petticoats and if Adam had britches they left us no pattern – and they were both naked and not ashamed. Does not half the moral dirt of the world spring from dirty suggestion? Let our youngsters be taught to swim. Will our State Schools look into this?”

In 1994, to mark the centenary of the enfranchisement of women in South Australia she was accorded recognition as a national hero, marked by a special proof coin being issued by the mint in her honour. This book adds to that honour.