Stan & Ollie: A great Hardy and an even better Laurel

Review: John C Reilly and Steve Coogan star in this warm film that works like a dream

The official trailer for Stan & Ollie, a film based on comedians Stan Lauren and Oliver Hardy. 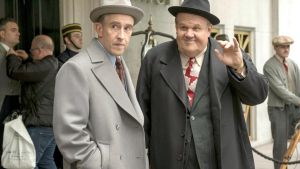 This agreeable genuflection to a pair of pop cultural deities begins with a huge tracking shot through a golden-age film set. It is the mid 1930s and, as they finish Way Out West, Stan Laurel and Oliver Hardy are haggling with producer Hal Roach about future plans.

You know how such bravura takes go. The camera rattles after the stars as they greet cast, crew members and passing strangers. We relax into John C Reilly’s fine turn as Hardy and Steve Coogan’s even better performance as Laurel. Danny Huston brings a loftier class of oil to the emollient Roach.

John S Baird, director of the Irvine Welsh adaptation Filth, looks to be taking aggressive hold of the tiller.

This proves to be an uncharacteristic flourish. We move forwards to find Stan and Ollie – the latter now wearing a few extra layers of fat suit – playing old material to modest crowds in the British regions. The atmosphere is often tense. Stan has never quite forgiven Ollie for a perceived professional betrayal.

Played with regal disingenuousness by Rufus Jones, Bernard Delfont, the legendary theatrical impresario, is more interested in the rising Norman Wisdom, but, after arranging a few publicity stunts, he manages to generate more attention as the tour moves to London and Ireland.

That’s pretty much it. There are few significant revelations. Though Stan & Ollie trades in much poignancy, it cannot be classed with those operatically miserable TV films about comics such as Tony Hancock and Kenneth Williams. The comedy is as gentle as the original films. The sentimental turns are worked ruthlessly. Nothing much happens that you don’t expect to happen.

Yet it works like a dream. The two lead roles could hardly be better cast. Neither Coogan nor Reilly manages to put light years between the performers’ onscreen personae and the actors’ real lives, but the lack of distance serves to hammer home a truth about the double act.

These were not stupid people. Hardy was not a pompous ass. Laurel was not a cowardly cry baby. But they teased little bits of themselves into the versions they presented on screen.

Coogan’s Laurel is the obsessive comic perfectionist, constantly worrying about his technique much as “Steve Coogan” does in The Trip. Reilly’s Hardy is the more vulnerable character, harried by health worries and the feeling that changing fashions have caught up with them.

Film historians still argue about how tolerant each was of the other, but this warm film ultimately settles for a turbulent, stubborn affection.

We are helped to that conclusion by excellent support from the wives. Shirley Henderson lets her worries leak out in acidic remarks as Lucille Hardy. Nina Arianda, Tony-nominated for a 2011 revival of Born Yesterday, deserves to achieve full breakout with her hilarious, scene-stealing turn as Ida Kitaeva Laurel.

A grand Russian actress who regards the rest of Europe as a mouldy kip – sniffing loftily at the notion that Buckingham Palace could compare with the Winter Palace – she slowly softens as the film progresses and emerges as her husband’s greatest champion. Get this woman a major comic lead right away.

There are (inevitably) a few peculiar omissions and alterations. A viewer wholly ignorant of Laurel and Hardy’s history could sit through Stan & Ollie without ever suspecting that Laurel – his Lancashire accent barely noticeable – is returning to the land of his birth. There is no mention of his Englishness. There is no sense that he is any more at home there than his larger partner.

It hardly matters. The picture still stands as a delightful tribute to twin phenomena so burned into collective consciousness that we need to be reminded they once didn’t exist. Domestic readers will particularly savour the later scenes in a welcoming Ireland.