The Upside: The penis gag is the least of its problems

Review: Kevin Hart and Bryan Cranston costar in this clunky retelling of a French hit 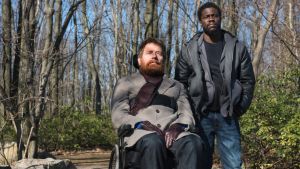 There is bad timing and then there was that occasion the vicar called round when you were hosting an interdenominational wife-swapping party. Neil Berger’s US remake of the French hit The Intouchables – by one measure the highest-grossing domestic release ever in that country – premiered way back at the 2017 Toronto International Film Festival.

Originally down for distribution by the Weinstein Company, it was shifted elsewhere following that firm’s slide into scandal-soaked insolvency. Never mind. Hang on for a year and everything will be grand.

The Upside features a scene in which Kevin Hart, carer to Bryan Cranston’s hopeless quadriplegic, is asked to handle his employer’s penis while inserting a catheter. Oh, he’s not having that. Not only can he not touch the organ; he cannot even bring himself to say the word “penis”. Hart works this sequence for all it’s worth. There’s nothing funnier than one man’s revulsion at intimacy with another man. Right?

Emerging as the comic fails to adequately address the homophobic gags that got him sacked as Oscar host, The Upside could hardly be more unfortunately scheduled. It won’t matter much. Clunky, sentimental and at home to yards of stereotyping, the picture will struggle to find an audience outside relatives of those mentioned in the credits.

The set-up remains similar to that of the French film. Hart plays an ex-con who turns up for a job interview largely by accident. Snooty Nicole Kidman, Cranston’s assistant, makes the sort of faces snooty white people make at Hart in all his films. But her boss, a billionaire widower paralysed in a hang-gliding accident, seems unexpectedly tolerant of the lack of enthusiasm and dearth of interest shown by Hart’s Philip. We soon discern that Cranston’s Philip, long in despair, half hopes that the incompetent will allow him to die. Unless we’re idiots, we guess that each will teach the other lessons and become a better, less suicidal person.

Based on an “inspiring true story”, the picture plays like the work of film-makers who’ve never met rich white people, poor black people or... well, people. Because he’s rich, Cranston speaks in flowery sentences, doesn’t connect with pop culture and likes the sort of classical music that comes on CDs with doves on the cover. Because he’s African-American, Hart is informal, intellectually unaffected and more in touch with his emotions. Breaking new ground in artistic simplification, they eventually bond over Aretha Franklin’s version of Nessun Dorma. Could they not have gone with Katherine Jenkins’s take on Straight Outta Compton?

Each of the cast members – including Hart, to be fair – makes a genuine effort and the ultimate message, for all the awkwardness of its telling, is more or less the right one. But this feels like a hopelessly benighted project.