Your guide to going out – and staying in – this weekend 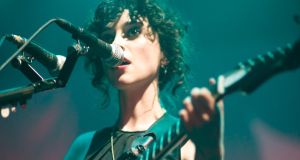 Annie Clark, known as St Vincent on stage, plays the Olympia on Friday and Saturday

Josephine K and the Algorithms

“Someone must have been spreading lies about Josephine K…” It isn’t hard to understand why Stacey Gregg has quickly become one of Ireland’s most frequently staged new writers at home and abroad.

Her writing responds to our most immediate concerns, often stretched into fantastical shapes or futuristic worlds, but rooted in what it means to be alive in the here and now.

Her new play for the Abbey threads Franz Kafka’s enduring piece of paranoid absurdism about a figure hounded by an unaccountable justice system, The Trial, into the age of big data, technological intrusion and online mobs.

Directed by Caitríona McLaughlin, the production takes an appropriately disorienting approach to the familiar space of the Peacock, leaving audiences free to negotiate a reconceived space through a breathless, hour-long showdown between Josephine, her judges, jury and executioner.

Oklahoma-born, Texas-raised Annie Clark is some woman – for several years and across five albums she has delivered songs that touch on love, sexual power, drugs, alienation and loneliness.

More than several tracks from her wonderful new album, Masseduction, will be performed here, while advance reports suggest that accompanying visuals will effortlessly mix and match (a la the new videos released so far) Clark’s distinctive sly wit with super-smart design aesthetics.

Wexford Festival Opera is in full swing this weekend, and among the highlights is a world-premiere of two one-act operas, Dubliners.

Based on Counterparts and The Boarding House from Joyce’s Dubliners, the operas, which feature as ShortWorks at Wexford, are composed by Andrew Synnott, with adaptation/text by Arthur Riordan, and performed by a cast of six accompanied by piano and string quartet.

The full-scale productions in the 66th festival programme, which is extended to 18 days , include Risurrezione (Franco Alfano), Margherita by Jacopo Foroni and Medea (Luigi Cherubini), directed by Fiona Shaw.

Better known for her theatre and film acting (including playing Medea in an Abbey production), Shaw also gives the Tom Walsh lecture on Saturday, and there are lunchtime recitals, other ShortWorks (La scala di seta by Gioachino Rossini and a condensed Rigoletto by Giuseppe Verdi), lots of exhibitions, smaller events and a wonderful vibe in the town until November 5th. www.wexfordopera.com

While we wait for the final series of Game of Thrones next year, fans can get to see Kit Harington in a new three-part drama, Gunpowder (Saturday, BBC One, 9.10pm).

The actor plays Robert Catesby, the man behind the plot to blow up the House of Lords in 1605. King James of Scotland has taken over the English throne following the death of Elizabeth I, and Catesby and a group of his fellow Catholics hatch a plan to kill the king and his entire court, putting a soldier named Guy Fawkes in charge of the explosives.

We all know what happened next, but with an all-star cast including Peter Mullan as Catholic priest Fr Garnet, Liv Tyler as Catesby’s cousin Anne Vaux, and Mark Gatiss as the king’s “spymaster”, we’re hoping this series won’t be a damp squib.

Westlife’s fans across Africa: ‘I listen to them every day’
10