Cillian Murphy as a ‘handsome banker’ in a toe-curling misfire

The Party review: The film is barely over an hour long, but shortness is the least if its problems 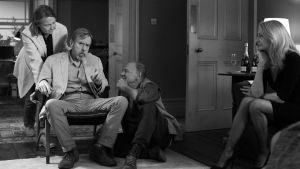 It’s bad form to expect movie goers to fork out for a film that, without credits, stumbles just past the hour mark. Insufficient length, however, is the least worst thing about this toe-curling misfire, in which a dinner party goes horribly wrong, and civilised bourgeois types are revealed to be, gasp, not so civilised after all.

At the centre of this Terry and June-ish soiree, Kristin Scott Thomas is Janice, a principled but ambitious politician who has just been appointed as the shadow minister for health. We know this as the other “characters” keep ramming it home, by telling us that she is “principled but ambitious”, that she still “thinks change possible through parliamentary politics”, and that she looks “slightly ministerial in that pinny in a post-postmodern, post-feminist sort of way”.

Janice’s salty best friend April, played by Patricia Clarkson, acts as a kind of Greek Chorus. As does everybody else.

Cillian Murphy is announced as a “ridiculously handsome banker”, who, accordingly, dashes to the lavatory to snort cocaine. April’s estranged new age husband Gottfried (Bruno Ganz) makes one yearn for the actor to resume his comparatively charming yelling Hitler act from Downfall: “It’s just a broken window,” he offers: “not a window into anyone’s soul.”

The attending lesbian women’s professor (Cherry Jones) is an insult to lesbians and women everywhere. Her pregnant partner (Emily Mortimer) seems to exist to furnish one dreadful punchline. Timothy Spall, as Janice’s long-suffering husband, sits maudlin in a chair, as his wife makes vol-au-vents and fields calls from a lover. He’s nursing not just one but two bombshells. Everyone else follows suit.

This talented ensemble appear to be competing in an inverted episode of Fear Factor, as they gamely force this year’s most atrocious dialogue through their respective gobs. Try this on for size: “I, too, am frequently described by internet trolls as an embarrassment.” Or how about the almost-Brechtian: “Tom is in the lavatory wearing an extremely expensive suit”?

Sally Potter, the director of Orlando, is presumably aware that these are things that nobody would ever say, and people that could never be. But purposeful alienation doesn’t make the exercise any less alienating. Even with Aleksei Rodionov’s handsome monochrome cinematography, this is still just a bad, bad play. Let’s not get this party started.