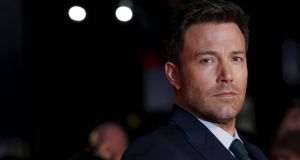 Ben Affleck has apologised for groping the actor Hilarie Burton during an appearance on MTV’s Total Request Live in 2003. The former One Tree Hill actor criticised Affleck on Twitter shortly after he had released a statement condemning film producer Harvey Weinstein for alleged acts of sexual harassment and abuse.

Burton’s comments came in response to a Twitter user who said that Affleck “grabbed Hilarie Burton’s breasts on TRL once. Everyone forgot though.”

Burton, who co-hosted the live music show, replied: “I didn’t forget.” Burton said she was “just a kid” when the incident allegedly happened. “Girls. I’m so impressed with you brave ones. I had to laugh back then so I wouldn’t cry. Sending love,” she later wrote.

Burton also provided a link to a supercut of highlights from the series, which included a clip of Affleck asking her: “How old are you, 19?” Burton was 21 when the scene was filmed.

Affleck apologised for the incident on Twitter. “I acted inappropriately toward Mrs. Burton and I sincerely apologise,” he wrote.

Burton’s comments came shortly after Affleck had been accused by actor Rose McGowan of lying about his knowledge of Weinstein’s alleged sexual abuse of women following his statement, which did not indicate whether he had any prior knowledge of the producer’s past behaviour. Weinstein was an executive producer on Affleck’s breakthrough film Good Will Hunting and worked with him on several other occasions.

McGowan, whom the New York Times reported had reached a $100,000 settlement with Weinstein over an incident in a hotel room in 1997, took to Twitter to criticise Affleck’s response. “’GODDAMNIT! I TOLD HIM TO STOP DOING THAT’ you said that to my face. The press conf I was made to go to after assault. You lie,” she wrote.

@benaffleck “GODDAMNIT! I TOLD HIM TO STOP DOING THAT” you said that to my face. The press conf I was made to go to after assault. You lie.

“I am saying exactly that,”she said.

McGowan laster had her Twitter activity suspended after she tweeted “f**k off” to actor Ben Affleck.

She announced the 12-hour suspension in an Instagram post. During this period she is not able to send tweets or retweets from her account, unless she deletes “tweets that violate our rules”, the notification from Twitter said.

Twitter has not made the exact conditions for locking an account public. However, on its support page it says that if it detects behaviour that may “inhibit other people’s ability to express themselves freely”, it “may temporarily limit certain account features”.

Affleck’s statement, and McGowan’s response to it, came in the wake of a New Yorker report that alleged Weinstein had raped three women. Weinstein said through a spokesperson that he “unequivocally denied” the allegations. Following the report, actors Gwyneth Paltrow and Angelina Jolie made accusations of sexual harassment against the producer.

Weinstein’s alleged behaviour has prompted a wave of condemnation from Weinstein’s allies in politics, including Barack and Michelle Obama, whose daughter Malia had served as an intern in Weinstein’s company earlier this year, and Hillary Clinton.

The Academy of Motion Picture Arts and Sciences, which hosts the Oscars, has said it will hold a meeting on Saturday to discuss the Harvey Weinstein sexual abuse allegations.

“The Academy finds the conduct described in the allegations against Harvey

Weinstein to be repugnant, abhorrent, and antithetical to the high standards of the Academy and the creative community it represents,” the Academy said in a statement.

The British Academy of Film and Television Arts (Bafta) also announced it had suspended his membership, effective immediately.

However, several prominent figures in the entertainment industry with ties to Weinstein have yet to comment on the allegations, including Quentin Tarantino and McGowan’s former partner Robert Rodriguez.

McGowan has been an outspoken critic of Weinstein and those with ties to him in recent days. She has called on The Weinstein Company to dissolve its board over the scandal.

On Monday, she criticised Affleck’s long-time co-writer Matt Damon, who at the time had not addressed the allegations against his friend Weinstein. Damon has since condemned Weinstein’s alleged acts, but denied knowledge of his alleged past behaviour. “If there was ever an event that I was at and Harvey was doing this kind of thing and I didn’t see it, then I am so deeply sorry, because I would have stopped it,” he told Deadline – (Guardian Service)

‘The Crying Game’: ‘They wanted me to cast a woman that was pretending to be a man’
2

Covid-19 and dementia: ‘My father studies me, as if trying to put together a difficult jigsaw’
3

Cat Power: ‘I was never an alcoholic. I was suffering from extreme depression’
Real news has value SUBSCRIBE