Written and directed by Kealan O’Rourke, 'The Lost Letter' was inspired by a story in The Irish Times. The short animated film was one of three winning entries in the inaugural Aer Lingus Filmmaker competition. 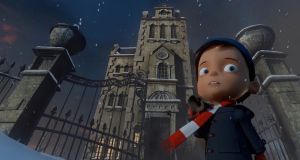 The Lost Letter: based on letter to Santa discovered up a chimney 100 years after it was written

A new short animation film inspired by an article in The Irish Times about a lost letter to Santa and narrated by actor Kate Winslet has been named as one of three winning films in the inaugural Aer Lingus Film-maker competition.

Film-maker Brian Willis’s winning The Lost Letter came about when writer-director Kealan O’Rourke read The Irish Times article about a letter to Santa which was discovered up a chimney in a Terenure, Dublin, house when central heating was being installed. It had been written in 1911 by a girl and boy who had lived in the house and was found 100 years later by the occupant.

In film, a little boy finds a lost letter to Santa that an old woman had sent as a child. She had lived with the disappointment of her letter’s request never being answered all her life. As an only child, she had asked Santa for a friend and now many years later her request came true with the little boy.

The animation is beautifully narrated by Winslet who did the work for no fee.

Winslet became involved through actor Alan Rickman, who is a friend of O’Rourke. Rickman asked her if she would consider doing the narration. Winslet looked at other animations the pair had produced and happily agreed to voice The Lost Letter.

“She really liked the script and our previous work, and was very enthusiastic. She is very aware of helping young filmmakers and giving something back,” said Brian Willis.

The Lost Letter was one of three films recognised at the inaugural Aer Lingus Filmmaker competition in Dublin last Thursday October 12th. The competition was arranged in partnership with the Irish Film Board. Budding and established filmmakers were invited to enter original work which were either live action or animation no longer than 15 minutes in length and with a general release certificate.

In Leap of Faith, one of the winning films which was produced by Jonathan Farrell, Kelly (Leah Egan) confronts Johnny (Aron Hegarty) as she senses they have a secret in common.

Set against the background of ordinary Dublin life, with the Luas, apartment blocks and damp streets, Leah forces Johnny – in a dramatic leap from the balcony of an apartment block – to reveal himself as having superpowers as she does.

Goodbye Darling by Maria Elena Doyle, set on the fifth day of the 1916 Easter Rising, deals with the death of Irish revolutionary The O’Rahilly.

The film opens with Nancy (Aoibhinn McGinnity) playing the piano and being comforted by the nanny (Deirdre Donnelly) after she has heard that her husband Irish Volunteer Michael Joseph O’Rahilly (played by Keith McErlean) is involved in the uprising.

We see him leading the charge that will ultimately claim his life. The film ends with her receiving a letter from The O’Rahilly, written as he dies in a laneway off Dublin’s Moore Street.

There were 83 entries which were whittled down to 12 from which the winners were picked. The judges were director and writer Neasa Hardiman, who has won Iftas and Baftas for her film and TV work; Emmy, Ifta and Bafta winner Dearbhla Walsh and actor Mark O’Halloran, known for films including Garage, Adam & Paul and Viva.

The three prize winners received €1,000, four transatlantic flights, and 12 European flights on the Aer Lingus network, giving them the opportunity to promote their work abroad.

The winning films will be part of Aer Lingus’s transatlantic in-flight entertainment for the whole of 2018, reaching a possible 2.5 million flyers. They will also be interviewed for Cara, the airline’s in-flight magazine.

Declan Kearney, Aer Lingus director of communications, praised the calibre of the films which entered the competition. “The response to the first year of the competition has been phenomenal and the calibre of the more than 80 entries we received was extremely impressive. Already we feel confident that this competition will grow year on year, allowing us to showcase incredible Irish talent on an international platform,” he said.