Think of a budget airline. You see? Negative publicity works 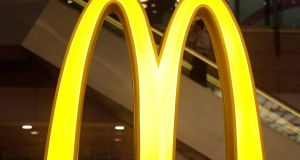 The whole kerfuffle started when a new episode of Rick and Morty made reference to a Szechuan sauce promotion by McDonald’s in 1998 to promote the Disney film Mulan. Photograph: Edgar Su/Reuters

Don’t read this column. Don’t entertain corporate monsters when they attempt to trick you into talking about their products. One of their more evil strategies is to allow an awful thing to happen in connection with Product One and to then sit back as newspapers mention Product One over and over again. Just watch.

Actually, I don’t think that is what happened with “Szechuangate”, but the story is so breathtakingly idiotic that it’s worth shoehorning into the argument.

Pay attention if you’re able. Rick and Morty is a popular animated series about a mad scientist and his nervous, eager grandson. Until this week’s events, its fans could reasonably be characterised as alert and tuned in. The new series’ opening episode featured another in a series of references to a Szechuan dipping sauce issued by McDonald’s to promote Disney’s Mulan in 1998.

Attempting to show that it is down with the kids, McDonald’s decided to reissue the sauce for a limited period. Very limited. As several thousand tweets pointed out, the company issued only 20 packets to each lucky restaurant. So what? It’s only an envelope of spicy corn syrup. No big deal.

Oh you naive, naive person. Punters queued for hours outside McDonald’s outlets and then went apoplectic when the sauce proved unavailable. Anger developed into paranoia as the unsatisfied developed black-helicopter explanations for this supreme catastrophe.

“REALLY horrible marketing to make 1000s of ppl line up for #SzechuanSauce when you only have 20 per location,” some genius remarked.

Did you just use the word “make”, madam? Did the people from McDonald’s call round at dawn with the rubber hoses?

Another potential Nobel winner grassed on a staff member who may have been shipping sauce elsewhere. “Hey one of your employees was seen carrying a box that said ‘promotion’ on the side out of the building to her car after telling everyone they never had the special sauce,” NinjaBizcuit tweeted to McDonald’s.

There is no confirmation as to whether Ninja actually got the modestly paid employee sacked.

There were literally thousands of complaints from fans apparently incapable of grasping how absurd the kerfuffle made them look. “Anyone know how to bring a class action suit against @McDonalds for false advertisement? Asking for a few thousand friends,” somebody else said. At time of writing, the best price on eBay for a sachet was $150.

What is wrong with these people? On instruction from an international supplier of famously tasteless food, they have tramped into lines and allowed themselves to be driven bonkers. Fandom has become dysfunctional.

For centuries, enthusiastic hobbyists have collected stamps, spotted trains and mounted butterflies. What’s depressing about the current incarnation is its willingness to play to corporate rhythms.

Comic-Con at San Diego used to be an event where comics fan could meet artists, trade classic issues and chat about favourite themes. That still happens. But the convention is now primarily a showcase for the studios’ upcoming blockbusters. Enthusiasts queue up to have the latest mega-that flogged to them. The advertising itself is part of the content.

Just observe the hysteria surrounding the release last week of the first full trailer for Star Wars: The Last Jedi. It’s a commercial. Stop making it so easy for MegaCorp to pick your pocket.

Where did we come in? The Szechuan mix-up was probably accidental. But it has worked out nicely for McDonald’s. The story has got the company’s name into the media. Most readers will, however, reserve their opprobrium for the overgrown babies whingeing about missing out on 25g of damp gunk. For once, “snowflake” seems appropriate.

The recent controversy concerning a commercial for Dove body wash seems just that bit fishier. In the promo, an attractive black woman pulls off a T-shirt and (thanks, presumably, to the transformative power of the product) emerges as an attractive white woman.

The company has some form here. In 2011, Dove released a commercial featuring three women arranged from left to right according to increasing lightness of skin tone. The word “before” appeared above the darkest woman. The white woman stood beneath the word “after”.

Who knows what the thinking was? But Dove gets a chance to mumble about misreadings – indeed, the black model, Lola Ogunyemi, insists the sequence has been viewed out of context – before issuing an embarrassed, stuttered apology. Then people like us write about it and the product’s name gets lodged more deeply in your brain.

This is just another way in which capitalism is awful. The evil masterminds at Robber Baron Incorporated get more publicity when they behave incompetently or offensively.

Let’s play a game here. What’s the first budget airline that comes into your head? See what I mean? Even Karl Marx couldn’t have foreseen this.