Harvey Weinstein was pushing me and screaming. He called me the C-word

Author and journalist Rebecca Traister speaks to The Women’s Podcast 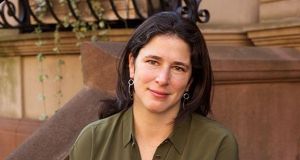 Rebecca Traister: “He shouts into the tape recorder about how uncouth I was.”

“I had the tape recorder on, it was the only weapon that I could think of. Then, he started pushing me and screaming at me, ‘how’d you get in here?’ ” recalls journalist Rebecca Traister, of her run-in with Harvey Weinstein 17 years ago.

She was a 25-year-old reporter for the New York Observer at the time and her editor Peter Kaplan had sent her to a party being hosted by the Hollywood mogul in order to doorstep him for a comment about an article she was writing, after he had refused to return her calls.

“He shouts into the tape recorder about how uncouth I was and what a c*** I was and then he said, ‘you know I’m glad I’m the sheriff of this piece of s**t f***ing town’,” she told Róisín Ingle, on the latest episode of The Women’s Podcast.

Traister says she had asked Weinstein a question that he didn’t like and that he had lost his temper. He then threw her male colleague down a flight of stairs before dragging him out on to the street in a headlock and punching him.

“I remember the feeling of flashes going off around me. There must have been 12 photographers,” says Traister, but such was Weinstein’s power that the story was spun in his favour and not one picture of what happened that night has surfaced since.

Journalists she knows have “spent literally decades” trying to build a story against Weinstein only to hit a brick wall. Traister says she was not surprised when she heard about the recent deluge of allegations, or the nature of them, but she has been taken aback by the number or them.

“Some of it you thought, that’s just rumour, or perhaps just exaggeration building on what I suspect to be true. It is sickening to read about it in such detail,” she says.

Also on the podcast, Traister spoke about the impending anniversary of the Trump election and the impact his policies have had on women’s rights in the US. It is depressing, she says, but that it why it is even more crucial keep struggling to move things forward.

“We all have to be energetic, even when it feels depressing. That’s the only way we will power through this.”

Rebecca Traister is the author of All the Single Ladies: Unmarried Women and the Rise of an Independent Nation. She will deliver the keynote address to University College Dublin’s Single Lives conference at the National Library of Ireland tonight at 6:30pm. The conference, discussing 200 years of independent women across literature, popular culture and media, runs until tomorrow, October 14th.

The Movie Quiz: What is the last line in Chinatown?
7