Two Days, One Night review: Marion Cotillard’s everywoman gets all fired up 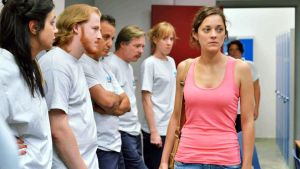 To the same extent as any broad fantasist, the Dardenne brothers have created a universe. It looks very like our own, but it still plays by the Belgian directors’ own rules. Life is cruel. Kindness can, however, be found in even the most desperate situations. They are the great humanist successors to Vittorio De Sica and Roberto Rosselini.

Any contrivance is usually well concealed in their films, but in the fine Two Days One Night – less oppressive than much of their work – the cogs, springs and wires do show through just a little.

An impressively flustered Marion Cotillard (the biggest star to yet appear in a Dardenne joint) appears as Sandra, an employee at a solar-panel factory. The film begins with her learning that her employers have decided to make her redundant. Her fellow employees were asked to choose between accepting their yearly bonus and allowing Sandra to be dismissed. Sadly, they voted for the former. But our proud heroine persuades the bosses to have a second, secret ballot. She has (yes) two days and one night to win over her pals.

It’s a schematic structure. Sandra, who is recovering from a spell of depression, stomps from one employee to the next. Some show immediate sympathy. At least one is actively hostile. Many sympathise, but, facing their own economic crises, express themselves unable to give up the bonus. Yet that episodic narrative allows the Dardennes to investigate a wide range of responses to current malaises in capitalism. All their films are political, but this is, perhaps, the most explicitly so.

As well as being an essay on solidarity, the film is also a terrific character study. Followed, as ever, by a hand-held camera (there are pornographers who have spent less time photographing the back of heads), Cotillard shakes off glamour to create a nuanced portrait of a courageous everywoman.

What side are you on, boys? We don’t need to ask.

White Riot: When rock fought the racism of David Bowie and Eric Clapton
5 Why Can’t a Woman Be More Like a Man? by Lewis Wolpert
Real news has value SUBSCRIBE