Star Wars: The Rise of Skywalker – For fans, there are things to love in this film

It has a good baddie, spectacular battles and the outstanding Adam Driver

The Rise of Skywalker is the fifth Star Wars film since Disney bought the franchise in late 2012. Video: Disney/ Star Wars 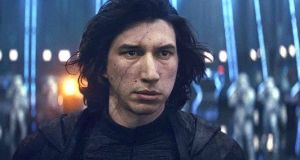 Star Wars: The Rise of Skywalker is not a very good film. It is overblown and soulless – a tin-can final part in Disney’s variable Star Wars trilogy. But we Star Wars fans are an optimistic bunch. We even stayed faithful to Uncle George’s splendiferous saga after The Phantom Menace gave us Liam Neeson as a sentient man-bun (oh, that was tough).

So, while we may be devastated by The Rise of Skywalker, we will continue to believe.

Besides, though disappointing overall, there are things to love in The Rise of Skywalker. First, it’s better than its predecessor: Rian Johnson’s The Last Jedi. That, as every long suffering Jedi junkie will recall, was a Star Wars movie that hated Star Wars even more than Star Wars internet forums hate Star Wars (and they really hate it nowadays).

JJ Abrams, director of The Rise of Skywalker, thus had a lot to fix. He had, in particular, to rustle up a satisfying conclusion to the Rey-Kylo Ren storyline, brushed off by The Last Jedi as an irritating inconvenience.

Johnson genuinely believed the best resolution to Rey’s arc would be that she was “no one” and not in the exciting Game of Thrones sense. The Rise of Skywalker’s solution is to parachute in Emperor Palpatine (Ian McDiarmid). Yes, the same Emperor Palpatine last seen disappearing down a Death Star shaft in Return of the Jedi.

Leaps in logic aside, Palpatine is a fine Big Bad. He cackles a great deal in The Rise of Skywalker, which is what you would want of a resurrected Emperor Palpatine in 2019. Better yet – and well done to him – he has somehow magicked up an entire fleet of Star Destroyers without anyone noticing.

Where did he get all the spare parts, fuel and crew, you wonder? This is because you are not JJ Abrams. JJ is famously a fan of “mystery-box” storytelling. Which means you make stuff up and worry about the details later – see the entire second half of Lost. But, still, at least Palpatine is here, cackling and being the Emperor. It gives Star Wars something to work with.

The Rise of Skywalker also does well by its heroes, for the most part. Rey (Daisy Ridley) reverts to her initial billing as the orphan with the fate of the universe on her shoulders. Kylo Ren (Adam Driver) reconstructs his helmet – shattered peevishly in The Last Jedi – and is compelling as a whiny Millennial Darth Vader. Can you imagine his Twitter feed?

Driver is by far the best actor in the new saga. When he sees the light and reclaims his heritage as Han and Luke’s son, the actor signals this simply through body language. Rather than stomping around like Vader, he slouches louchely in the style of his dad, Han Solo.

John Boyega’s Finn – so charismatic in 2005’s The Force Awakens – is by contrast left largely to his own devices. That’s a shame. Boyega radiates charisma. When we look back on Disney’s Skywalker trilogy, it is his charm and Driver’s intensity that stand out.

Justice is meanwhile done to the original trilogy’s “big three” of Luke, Leia and Han. Mark Hamill hated what The Last Jedi did to Luke – i.e. turn him in to the grumpiest man in the universe. So it’s no surprise he would have conspicuous fun playing the character as the blue-eyed optimist originally envisaged by George Lucas. Fisher, who died in 2016, receives a respectful send-off (her scenes stitched together from pre-existing footage). And look, there’s Harrison “I hate Star Wars more than fans do” Ford back as Kylo’s dad… and, wait, what?, enjoying himself.

As is standard practice in the JJ Abrams universe, The Rise of Skywalker gets sillier as it goes along. But there are some stunning sights along the way – Kylo’s fighter bearing down on Rey, Palpatine’s armada of Star Destroyers hovering about the ghost planet Exogel. The film is strong on spectacle.

Where does Star Wars go from here? Well, this is by no means the end. The Rise of Skywalker will reap the traditional box office billions (I dislike the movie but will watch it again at least twice).

And Disney will no doubt learn from its mistakes. The lesson of the new trilogy is that there is still an appetite for Star Wars and that the fanbase is open to new heroes carrying on the legacy of Han, Luke and Leia.

If the Magic Kingdom can transfer the storytelling of its Marvel series to Star Wars, then the future is bright.