Review: 1985’s Buddies was the first, and arguably still the best film to tackle the Aids crisis 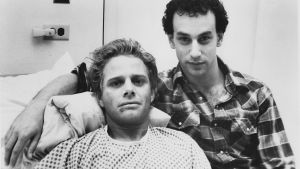 David (David Schachter), a 25-year-old typesetter with an academic interest in the Aids virus, is given strict written instructions as he enters the ward: “Wear your mask”; “Dispose of your gloves before leaving”. David has volunteered at the gay centre to be a buddy to an Aids patient.

His first encounter with Robert (Geoff Edholm) is not a roaring success. The two men are very different. Robert is 32, fiercely political, fighting his fourth bout of pneumonia, and all alone. “It was like one of those silent films where the father throws the kid out into the storm,” he says of his coming-out. When he reads a Christian account of Aids as a gay plague, he literally foams at the mouth, Klaus Kinski-style, with anger.

David has grown up with supportive parents and has a boyfriend of five years. He’s more than a little shaken by Robert’s fire and his frank questions about sex and even franker confessions.

Shot on 16mm film in nine days, Buddies was the first, and arguably still the best, to tackle the Aids crisis. It remains a tender, angry, funny and urgent film, an intimate and beautifully-performed two-hander that, even on a shoestring production budget, allows for rage at Reaganite indifference and an almost unbearably poignant fantasy beach sequence.

A final shot of David as a lone protester with a handwritten sign outside the White House, set to the lush strings of the New York Salon Quartet, makes for a strangely hopeful spectacle, against bookending shots of a printer punching out a list of those who have died from Aids.