The glossiest, prettiest movie of 2019 is overstyled and primed for the Oscar red carpet 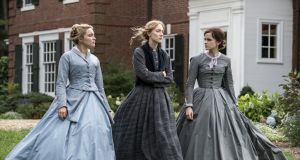 Little Women: Its unremitting gorgeousness robs the material of all its grit, of its satire, of the sense of precariousness 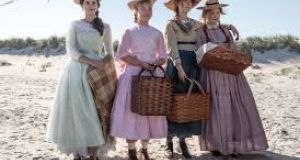 Unremitting gorgeousness: Beth’s demise, which so profoundly affects Jo in the book, is an excuse for a lovely day at the beach and too much blusher

Every character is overstyled, overwigged, and made up for the Oscar red carpet. Every scene is either windswept tableau or fabulous period interior. Every table is adorned with the most gorgeous cakes and wines to be found in whatever hip Brooklyn eatery produced them. The games and plays staged by the sisters have props and costumes that would give the Royal Opera a run for its money.

It’s a ravishing spectacle. The trouble is that the unremitting gorgeousness robs the material of all its grit, of its satire, of the sense of precariousness that one experiences on the characters’ behalf, of the fear of hunger, and of the dread that any chill or fever might be a death sentence.

The wait for the family patriarch to return from the frontlines is an afterthought. Beth’s demise, which so profoundly affects Jo in the book, is an excuse for a lovely day at the beach and too much blusher.

The perfumed, powdered aesthetic makes for a strangely sexless version of a book that is jollied along by curiosity. They might look amazing but there is no sexual chemistry between Saoirse Ronan’s Jo and Louis Garrel’s Friedrich, a void that makes a nonsense of the film’s final supposedly romantic dash.

In fact, the only real moments of emotional clout happen between Beth and her kindly benefactor next door, Mr Laurence snr, played by Chris Cooper.

Taking the movie on its own glamorous, flighty terms, it’s a fun, frolicsome affair. Florence Pugh, who is saddled with Amy, the youngest and brattiest March sister, not only makes her character loveable, she steals every scene she’s in, even when going toe-to-toe with Meryl Streep (who brings a riff on her Florence Foster Jenkins).

Ronan is a terrific, perennially breathless Jo, albeit a version of Jo that owes at least as much to Greta Gerwig as she does to her literary predecessor.

Timothée Chalamet’s Laurie bounces well off Ronan and Pugh – a blazing break-up row with the former is a highlight – but he fizzles with lesser screen partners. Dern is better than saintly Marmee deserves.

Gerwig’s lightly metatextual script cleverly plays with chronology and Louisa May Alcott’s biography in ways that will require close attention from those unfamiliar with the literary source. This is a pleasing fairy tale. But we’ve been prouder of our Little Women.

The Books Quiz: Name the four ministries in George Orwell’s 1984