Founding member of the celebrated British sketch troupe was also a director, screenwriter and an authority on Chaucer 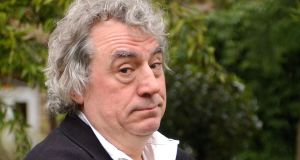 Terry Jones, who died on Tuesday aged 77, earned a spot in comedic lore as a member of British troupe Monty Python and also had success as a director, screenwriter and author.

Jones, who died at his home in the Highgate neighbourhood of North London, announced in 2016 that he had primary progressive aphasia, a neurological disease that impairs the ability to communicate.

Jones, along with four other Britons – Michael Palin, Eric Idle, John Cleese and Graham Chapman – and an American, Terry Gilliam, formed Monty Python in 1969. Their television sketch show, Monty Python’s Flying Circus, became a phenomenon, first in Britain and then in the United States when it was rebroadcast there in the mid-1970s.

The show worked a surreal brand of humour that was markedly different from most television fare. It led to And Now for Something Completely Different, a 1971 movie that was essentially a collection of skits from the TV show, and then several other feature films.

Jones and Gilliam jointly directed the first film after Something Completely Different, Monty Python and the Holy Grail (1975), and teamed up again on Monty Python’s The Meaning of Life (1983). Jones was the sole director of Monty Python’s Life of Brian (1979), the most successful financially. He also directed his own projects.

And he was an author, both of scholarly fare, such as Chaucer’s Knight (1980), an alternative view of a character from The Canterbury Tales, and of books for children. The Boston Globe once called him “a warped Renaissance man”; He was a Renaissance man of sorts on Monty Python’s Flying Circus as well. The many characters he played included an organist who tended not to wear clothes, a fellow known as the Amazing Mystico who could build buildings by hypnosis, and an assortment of middle-aged women.

“Cross-dressing seems to be a long-standing Python tradition,” Filip Vukcevic wrote on media site IGN in 2018, “but when Jones does it, his butch bulk makes him the most terrifying shemale in all the land.”

The popularity of the show soon made “pythonesque” an entry in the Oxford English Dictionary. “The one thing we all agreed on, our chief aim, was to be totally unpredictable and never to repeat ourselves,” Jones deadpanned to The New York Times in 2009, when the group had a rare reunion at the Ziegfeld Theater in New York. “We wanted to be unquantifiable. That ‘pythonesque’ is now an adjective in the OED means we failed utterly.”

Terence Graham Parry Jones was born in Colwyn Bay, North Wales, on February 1st, 1942, “right bang slap in the middle of World War II”, as he put it in The Pythons Autobiography, a 2003 book by the troupe with Bob McCabe. His father, Alick, was a banker by profession but was in the Royal Air Force at the time and stationed in Scotland.

“I suppose they must have been guarding the grouse,” he wrote, “although he used to say later that they were testing out this newfangled stuff called radar. He came and saw me when I was a week old, and was immediately posted to India. I would be four before he saw me again.”

When he was five the family moved to Claygate, in the London suburbs. A favourite among the radio offerings he listened to was The Goon Show, a comedy program that often veered into offbeat territory and had a cast that included Peter Sellers.

“It was the surreality of the imagery and the speed of the comedy that I loved,” he wrote in the Pythons book, “the way they broke up the conventions of radio and played with the very nature of the medium.”

That, of course, was what Monty Python did with television, but Jones’s aspirations were yet to crystallise. He did think early on that it would be nice to be an actor, but Royal Grammar School, Guildford, which he attended, was not a place to encourage such things.

“The nearest we got to drama lessons was in divinity classes,” he wrote, “when the headmaster would advise us that all actors were homosexuals and you could tell because they wore green suede shoes.”

He was accepted at Oxford and agreed to attend. He almost changed his mind when Cambridge, which had put him on a waiting list, also accepted him, but he stuck with Oxford despite being intrigued by Cambridge’s poetry programme. That was a good decision, he later reckoned; otherwise “I wouldn’t have met either Mike Palin or Geoffrey Chaucer – and without those two meetings the rest of my life would have been quite different.”

He joined the university’s Experimental Theater Club, known as ETC, spurning the more organised Oxford University Drama Society. He was also a decent scholar, something that he tapped later, but in The Pythons he recalled a moment in the library when, parsing some literary criticism, he realised that comedy and performing would take precedence.

In 1963 he performed in and helped write his first revue, Loitering With Intent” (“because it was done in a tent”, he explained). Palin, a fellow Oxford student, contributed material to that show. Both also worked on Hang Down Your Head and Die, an ETC show about capital punishment that, after its premiere at the university in 1963, went on to a six-week run at the Comedy Theater in the West End in 1964.

The two also contributed to the 1964 edition of a show called The Oxford Revue, which was noticed by David Frost, who soon offered both Jones and Palin jobs writing for The Frost Report, a television sketch show that had its premiere in 1966 on the BBC. Chapman and Idle were also on the writing staff, and Cleese was in the cast.

The next year Jones, Idle and Palin collaborated again on Do Not Adjust Your Set, a children’s TV show full of comedic sketches that foreshadowed the Python style. Gilliam eventually contributed some animation. Though that show was aimed at children, it had a number of adult fans, including Cleese and Chapman. “It was our treat on a Thursday afternoon,” Cleese said in The Pythons. “We would finish early and watch that because it was the funniest thing on television. I said to Graham, ‘Why don’t we ring the guys and see if they want to do a show with us?’ “

And that, in 1969, was how Monty Python’s Flying Circus came about. The name, though, was almost Owl Stretching Time or A Horse, a Spoon and a Basin. Those were among numerous names bandied about for weeks, until time ran out, and the troupe and the BBC, which was to broadcast the show, had to agree on something and finally did.

“I went back home and told my brother, We’ve got a title for the show, we’re going to call it ‘Monty Python’s Flying Circus’,” Jones later recalled. “And he said, ‘It’ll never catch on’.”

The series, which made its debut in October 1969, consisted of absurdist sketches that often ignored the established rules of comedy – the Pythons eschewed the punchline – yet somehow spoke to the rampant illogic of life and society. A man writes a joke so funny that he dies laughing, and it becomes a top-secret weapon of war. A game show host (played by Jones) gives contestants 15 seconds to summarise Proust’s seven-volume In Search of Lost Time.

Gilliam’s animations punctuated the proceedings. The show seemed simultaneously subversive, brainy and silly, though its creators tended to play down how much deep thought went into it. “We didn’t know what we were doing, and insisted on doing it,” Idle wrote in Always Look on the Bright Side of Life: A Sortabiography (2018).

There were camps and alliances within the Pythons. Jones generally wrote with Palin. He was said not to get along with Cleese, although he shrugged off such claims. “I only threw a chair at John once,” he told Vice in 2008. In a different interview his recollection was, “John Cleese only threw a chair at me once.” In any case, the hit show led to Python movies and a directing career for Jones. Life of Brian was especially well received. Vincent Canby, reviewing in The New York Times, said it “succeeds in sending up not only movies like The Greatest Story Ever Told and King of Kings, but also a lot of the false piety attached to the source material”.

He called it “the foulest-spoken biblical epic ever made, as well as the best-humoured.” Some, though, were not amused; the film was banned in many places, including Ireland – Glasgow lifted its prohibition only in 2009 – and prompted protests in many others.

Jones’s directing credits outside of the Pythons included Personal Services (1987), based on the story of a real-life madam, and Erik the Viking (1989), a Norse yarn he also wrote that starred Tim Robbins as the title character. That movie was somewhat related to a children’s book Jones had published in 1983, The Saga of Erik the Viking, illustrated by Michael Foreman ? one of several children’s books they worked on.

In an interview on the CBC show George Stroumboulopoulos Tonight several years ago, Jones expressed some surprise at the longevity of Monty Python, whose Holy Grail Idle turned into a hit Broadway musical, Spamalot, in 2005 and whose legacy has been perpetuated in various DVD releases.

“If you had said to us when we were doing the TV shows, ‘We’ll be still talking about this in 40 years’ time’,” he said, “I would have thought you were loco.”

After he received a diagnosis of bowel cancer in 2006, Jones applied his skills to humorous educational videos about health issues. Jones married Alison Telfer in 1970; they separated around 2005 and later divorced. In 2012, Jones married Anna Soderstrom. She survives him. His survivors also include their daughter, Siri, and two children from his first marriage, Bill and Sally Jones. – New York Times