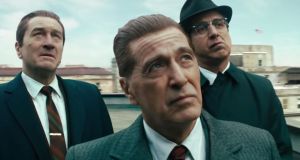 THE IRISHMAN ★★★★★
Directed by Martin Scorsese. Starring Robert De Niro, Al Pacino, Joe Pesci, Anna Paquin, Harvey Keitel, Stephen Graham, Bobby Cannavale, Aleksa Palladino, Domenick Lombardozzi, Kathrine Narducci, Ray Romano. 16 cert, lim release, 209 min
When it was announced that Scorsese was to reunite with De Niro and Pesci (and belatedly invite Pacino into the Family) for a tale of postwar gangsterism, premature comparisons were, not unreasonably, drawn with Casino and Goodfellas. The master’s study of hitman Frank Sheehan is, however, in a very different mood: subdued, unhurried, wintery. The digital de-aging is occasionally a distraction, but the gorgeous performance and rigorous period detail are (ahem) to die for. Pacino is a standout as union boss Jimmy Hoffa. Full review DC

At 17, Luce (Harrison) is a dashing high schooler, as admired on the track as he is on the debate team. Luce’s charms are challenged by his prickly African-American history teacher, Mrs. Wilson (Spencer), who calls on Luce’s caucasion parents (Watts, and Roth) after he writes an essay on the Pan-African activist Frantz Fanon. Mrs Wilson is equally alarmed by a bag of illegal fireworks she has found in Luce’s locker. The boy, we learn, was adopted from war-torn Eritrea, where he was a child soldier. His parents have seen him through years of therapy and rehab. Is Mrs Wilson, knowing Luce’s personal history, simply projecting? Is she being overly hard on him because he’s African-American? Or is something genuinely sinister going on? A provocative film to mull over. TB

Werner Herzog doesn’t half like Mikhail Gorbachev. He explains that most Germans have “overwhelming approval for you personally. We love you.” Dispelling any suspicion that he is among the dissenters, Werner adds: “I love you.” The unrelenting adulation is a problem. More than a few interesting lines of inquiry are not followed to satisfactory conclusion. But Meeting Gorbachev remains a fascinating study of a remarkable man: from life on a small farm to one of the 20th century’s key political forces. DC

Lord of the Flies is an obvious reference for this nervy, thrilling tale of child guerilla soldiers. But there’s also something Aguirre, the Wrath of God in Colombian director Landes’ surreal, wildly beautiful third feature. The near feral teenage commandos, known only by their nicknames (Dog, Bigfoot, Rambo, Swede, Smurf, Boom Boom), take their orders from The Messenger (Salazar), who represents a mysterious paramilitary called The Organisation. When two of the Monos, Lady (Quintero) and Wolf (Giraldo), are tasked with watching over an American prisoner (Nicholson) and a cow called Shakira, a series of events implodes their rough society. Easily one of the best films of 2019. Full review TB

James Glaisher (Redmayne) was the daring meteorologist who, in 1862, broke the world record for altitude when his balloon ascended to 35,000 feet. In old-fashioned, matinee style, Harper’s film builds a grand romantic adventure - Jones is super as his fictional companion - around the story’s central spine. You can get the facts from Wikipedia; The Aeronauts devises irresistible new legends. Lovely Victoriana. Great chemistry between the leads. At least one heart-stopping moment of tension. Well worth your time. Full review DC

A middle-aged man signs on as a “self-employed” driver for a delivery firm. His life falls apart. Collaborating again with writer Paul Laverty, Loach does an excellent job of explaining how “the gig economy,” relieves employers of moral and legal responsibilities. The research feels spot-on, but the heart-breaking performances are what really drive the film. Hitchin and Honeywood are great as mum and dad. Stone and Proctor are next-level as the children. Loach is still at the top of his game. Full review DC

Other ★★★★★ and ★★★★☆  films out and about: Brittany Runs a Marathon, A Bump Along the Way, Dora and the Lost City of Gold, The Farewell, Hustlers, Joker, The Last Black Man in San Francisco, Lost Lives, The Peanut Butter Falcon, A Shaun the Sheep Movie: Farmageddon